Time, space and the interest to start painting again finally got me putting together a new set of paints, and collecting bits and pieces to assist me. (Working in the “office supplies/stationery” business didn’t hurt either, especially for pens, markers, cardboard, knives, steel rulers, and the occasional brush – great for producing scenery, maps or dungeon floor-plans!)

I had an assortment of paints and had found my brushes and had a box to put everything in. I grabbed a bunch of Dwarves and a few other figures that I wanted to paint and started undercoating. 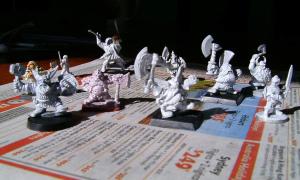 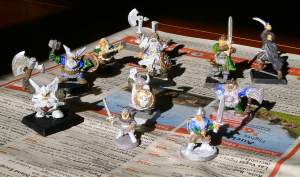 Funnily enough, these 11 figures included two that had been undercoated perhaps a decade earlier and that had been as far as I got.  It also included two versions of “Gimli”. Over the next month I finished them off and I’ve been quite pleased with the result. I’ll need to get them all out again, touch them up and spray them with a varnish to protect them. 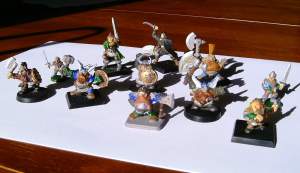 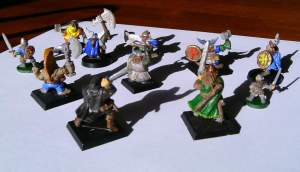