Painting 5.2 – It is estimated that at any one time 1% of your skeleton is being replaced

…and that one percent produces undead skeletal warrior miniatures! (I don’t remember where these originally came from, so that’s as good an explanation as any. I don’t know about the armour and weapons!?)

These figures should have been finished a week ago, but I’ve been distracted by reading, discouraged by hot weather and/or any number of other things. They got final touches last night and a spray of varnish tonight.

I’ve enjoyed doing these a lot more than the ghouls! When it came down to it, even though each had a “unique” pose, they were still a pack of half-naked, loincloth wearing humanoids holding a bone. The skeletons have a lot more variety – yes, each is basically a skeleton wearing chainmail and holding a weapon – but the weapons are different, the style and amount of armour varies, some have belts, shields, shoulder pads, greaves, tabards/robes, different helmets, etc.

I started with a basic light flesh colour over exposed bone, then a mid grey over weapons & chainmail (and some armour pieces). A black wash filled in the “holes” in the mail and then silver (mostly dry-brushed) over the mail. (A few of the figures could have done with a second black wash to make it stand out. The mail looks much better with the black, than on a few figures where it isn’t distinct “behind” the silver.) Rags, tabards, cloaks, shirts – all done in a basic blue to give a common link between each figure. Dark brown or red-brown on weapon hafts/handles, the wooden shields, and what looked like leather armour pieces on a few figures. These chest or shoulder pieces got a black wash afterwards which gave them a very leather-look which I was suprised by – much better than I planned or expected. Most of the helmets (and greaves) I did with a light yellow-brown that I got recently, then over that with my “antique” gold. Bronze on one helmet and a mix of bronze or gold on greaves (and one set of shoulder armour). Silver on two more helmets. Gold or bronze as contrast for detail on helmets

I tried a few darker bits on the figures with a lot of blue clothing – most of that didn’t work, and I couldn’t be bothered doing more. A dark-brown wash went over the bones to bring out lines and “separate” the bones on legs, feet, hands, etc. That also came out better than I’d expected, and a friend commented that it also gave them a dirtier/older look.

Most of the painting was now done and I was looking at small details – weapon hilts, scabards, belts and buckles, helmet spikes/wings. Most swords (or bladed weapons) I paint silver. I tried axe heads in grey this time and it looks okay – the close-up photo gets a lot of reflected light, so the axe doesn’t look as good in the picture as in reality. Touch ups like black in the eye sockets if the brown wash hadn’t darkened them enough, a hint of white on teeth and cleaning up anywhere that paint had spread where it wasn’t meant to. Last night I gave another pale flesh dry-brush highlight on any bone that I thought needed it – especially if the earlier brown wash had covered too much. 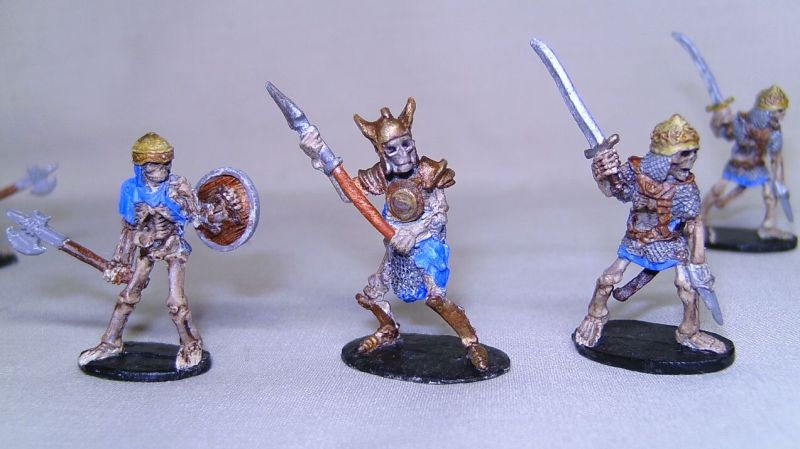 Done! The six skeletons (three pairs) have excellent detail and look really good painted. One pair has no lower jaw – it’s not obvious, but it’s something that’s fun and different. The other three are good figures, but the detail isn’t the same – especially with the skulls – and I find that disapointing. Over-all, I had more fun painting these than anything else this year, and it was good trying a few different things – every group of figures teaches me something about painting.

I keep looking at jewellers files on eBay… I could really do with few to clean up figures before undercoating. I might just have to click on “buy”… and thanks to Azazel who donated a bunch of “old” (but still good) paints that has at least doubled the colours/shades I have to use!

Next – Vampires, wights and wraiths… (oh my!)

A good day to die…

Every few weeks I get together with friends and we continue in one of the two D&D Campaigns that we have running. Last night was a session that a friend is running (I DM the other campaign) and so I was playing!

We use the Pathfinder d20 system, but draw heavily from 3rd and 3.5 editions because that’s the main material we own and are used to. We also use miniatures for nearly everything on home-made floor-plans. If I keep blogging about our sessions, I’ll start taking regular photo’s. Here’s an old image:

Low level adventurers on some of my better quality floor-plans.

I use Hero Lab* to keep track of character detail and make sure we don’t miss anything when levelling. (* NOTE: This program is the BEST gaming resource I have ever owned & used! If you are a GM/DM/Ref for any of the games it supports you should at least download and trial it.)

The basis of our adventuring group is a human Fighter (Fulcrum), a human Paladin (Lightning), a dwarven Cleric/Wizard/Mystic theurge (Barak, my character), a human Bard (Jenisky) and a elven Scout/Warmage (Fayed). Due to a rush on “Leadership” feats over the last few levels, there are also 3 cohorts (player run NPC’s) – two Fighters & a Ranger. The main characters are all 13th level, so we can both take and deal out something nasty… at least until we break our usual pattern of exploration and something unexpected happens. Last night that was TWICE!

1st Mistake – We had finished a confusing conversation/encounter with a spirit of philosophy (one of the four we have to deal with in this dungeon) and had 2 Demons (12HD Glabrezu) break into the chamber and beat us up. [This is one demon we love to hate and also one of the few I don’t have a mini for.] We’d mostly healed and our scout looked into the next room and thought he saw dwarven writing (that he can’t read). The bard followed me as I went into the room to look at the writing and just as the two of us moved away from everyone else, about eight giant slugs dropped in around everyone.

These slugs are huge, have about 100hp’s, DR 10/slash&peirce and spit 10d6 acid as a ranged-touch attack. I think now that the DM was mistakenly allowing the slugs to both make a melee AND a ranged attack each turn and so we took a heap of damage. [Orez – this means you if you’re reading!] Barak went down unconcious after fumbling his warhammer (and throwing it behind a slug) and was healed by the bard back to conciousness. With only one slug threatening the two of us, I choose to blast it with a spell rather than heal myself. (Stupid move in hindsight) Of course, I didn’t kill the slug, so it thumped me again (2d10 +12 + 2d8 acid damage). This time I was DEAD… thankfully I carry a Raise Dead scroll which with good rolls the Bard was able to cast and then after some healing and Restoration (to cancel negative levels) I was back to normal.

2nd Mistake – Fayed walked into a new room and thought he saw something at the back. Instead of calling out, he wanted a better look and four of the seven Nabasu Demons hit him with enervation spells: 10 negative levels. (So he’s suddenly got -10 penalties on everything and low hp’s) In the next few rounds, he (and others) got death-gazed and so he died and became a ghoul. So we killed him as well as the demons. Two of the characters have a single negative level and I’ll need to rest and memorise another Raise Dead!

<The DM has since reminded me that we will need ressurection – which I can’t cast – not raise dead. At least we have a heap of money to spend! >

What is one of the most common phrases in any of our gaming sessions?

End note: I realised while typing this that I think we didn’t look at the writing on the wall. I wonder if it really was dwarven?

I finished this lot on friday night, but I was out most of yesterday so they only got varnished this morning. It took a while to get some good photographs too. I really wish I had a display case or something now – it’s a shame to just put these back into a miniatures box after all the work I’ve done!

From 2 weeks ago – primed and flesh painted… I have a pale flesh tone that came out nicely on these ghouls and I’ve also used it as a base colour for bones on my skeletons. (It’s actually lighter than nearly all of the bone colour on my pre-painted minis.) 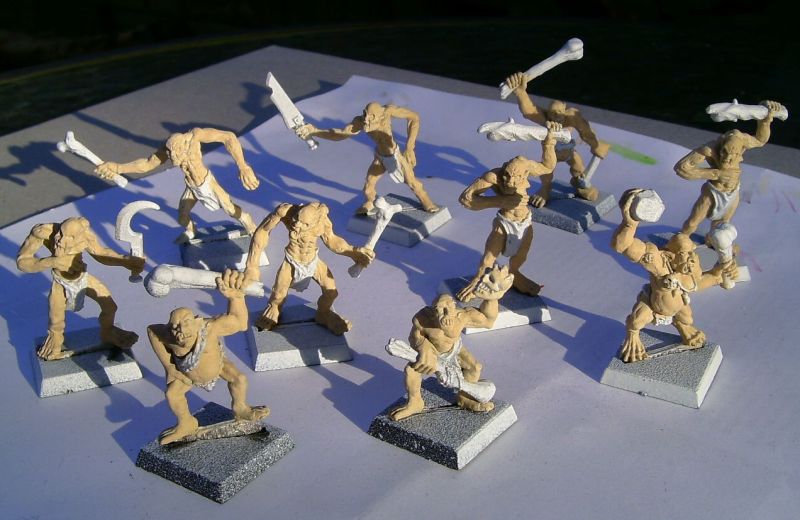 I do nearly all my figure painting using an outward plan – I start with flesh, then inner clothes, outer clothes, held items, etc. I painted the ghouls “rags” in pairs – red, blue, green, yellow and brown – then went over them in grey and brown to dirty and wear/fade them back. Most of them carry bone clubs and I used mostly white to make the bones stand out, with touches of brown to weather the bone. [Note: I have a supply of fresh and older bones floating around the back-yard… a result of throwing scraps to my chickens, so I went out and looked at a few for ideas!]

Other weapons were next, done simply and not with as much attention to detail as I could have used, but I did spend extra time on the skull one ghoul holds. I should have re-based my figures after flesh painting them, but I hadn’t decided what to do earlier. Azazel gave me a whole bunch of bases he didn’t want – circular ones that I find much better than the tiny squares most of these came with. I painted over his “grass flock” with a dark brown and got a earth look that I really like and glued the ghouls in.

Final details – white over the eyes, teeth and claws, then a “hull red” paint as a wash over the faces to pick out some of the detail. I also used this on claws too. Then red eyes, tongues and some “blood” on weapons. I’d been going to do a blood-red wash over the flesh, but I’d liked the hull red effect and used that. It picks out ribs and muscles, but also gives a bit of a dried-blood or diseased flesh look.

Most of the 3rd ed D&D images of ghouls have them looking purple-fleshed and the WoC prepainted minis are a greenish-yellow that I don’t think much of. Originally I was going to try a purple wash over the flesh, but playing Kings of War this year (with Azazel’s Undead army) gave me a different idea. His ghouls look more normally coloured but with musculature emphasised almost like they are missing a layer of skin.