Normally I don’t do anything about “basing” my figures except for making sure the figure is glued into the base and that any metal under the figure is blackened so it’s not obvious. Most are on 25mm bases, so there’s also not a lot of room to do much. Thirdly, most figures are used irregularly in games as individuals, not as part of an army – I don’t see a point in spending extra time to do a fancy base.

The “unfettered” Dracolich I repainted on the weekend actually has a fair amount of space around the rock on the base, and when Azazel suggested doing something (at least to the rock) I went to bed with a bunch of ideas running through my head.

When I painted my dark elves, I collected some small stones (for rocks) to decorate some of their bases. After I was done, I tossed the remainder back into the yard. This time I’m keeping stones and putting them in a bag!

So I had an assortment of flat and pointy rocks which got glued to the base. I found a hand holding a spear in my bits bag and cut off the pointy end, then “splintered” the haft. I have a heap of shields, so found a nice one and cut a chunk out of it. Then I went looking for something to fill out the rest of the base. I really wanted sand, but raided my chicken supplies and came up with something very close – finely ground sea-shells. (The chickens need calcium for strong eggs.) This got glued on, then everything painted black. The rock got touches of gray, and a few different browns until everything looked like I wanted it. Some grey dry brush over some rocks, and a strong tone ink wash over all. The painted spear and shield were glued on and I turned up some real bones in the back-yard to be trimmed slightly and glued on as well. (I never thought my chickens would contribute to miniatures!)

All of this meant the Dracolich itself deserved a little more work – so I touched up gaps in painting and did some more highlighting to blend the bones on it nicely. I had some good sunlight through the yard so I got some worthwhile shots of the basing. The main rock looks particularly good in natural light. 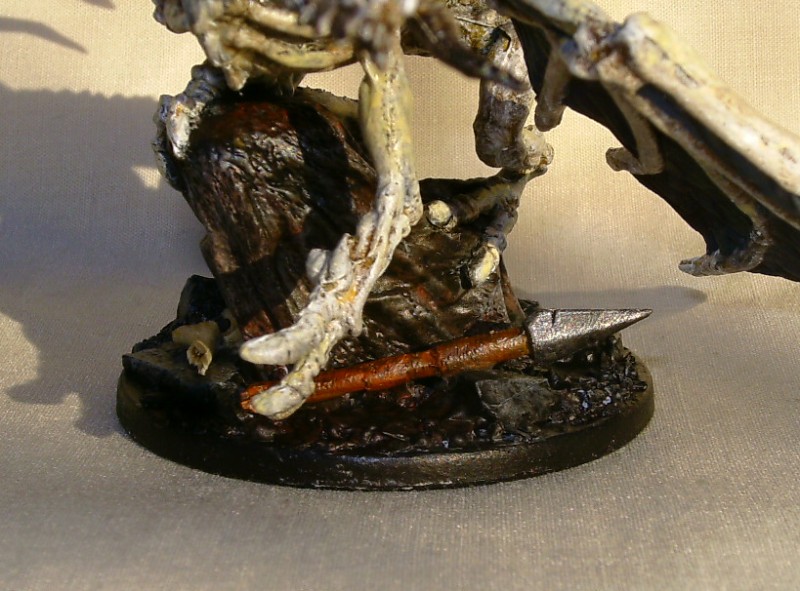