No soft white plastic here! This metal Citadel figure is the mount for my Mouth of Sauron figure that I painted quite a while back. This is a great, well detailed miniature that really deserved the work that I’ve put into it over the last two weeks. I’ve also been watching a lot of Grimm (Season Four), and producing floor plans for D&D (final stage of Expedition to the Demonweb Pits).

Yellow Ochre for a base colour all over, then some careful white paint over the bones. AP ink (Strong tone) over that to darken the gaps, holes, lines, etc… then white again, with a touch of flesh in some spots, and another run of ink. More white highlighting, and a bit of black paint in the eye sockets. Burnt Sienna on the reins with black ink (AP Dark Tone) to detail the eyes on those. A light grey (Field Stone) on the hooves, followed by black ink.

The horse got re-based about this stage – glued to a 40mm round base, then some moulding paste, sand and a couple of small stones. Once dry, painted mostly with Burnt Sienna, and touches of Hull Red and black. A little brown ink to make sure the gaps were “filled in”.

I wasn’t sure what to do with the barding, and I’d initially painted all of that black. I went over it later with a dark grey, then (as I started to have some ideas) used AP Green Tone ink and a hint of silver. This gave me a nice dark metallic green look to the armour. Some black ink shaped the eyes and I wasn’t sure about colouring them like I’d done on the Mouth of Sauron. Then I decided to try gold instead of yellow – found an Antique Gold that came up nicely, then a bit of crimson in the middle of the eye. Black ink over that has filled the lines and makes the eyes stand out a little more than otherwise.

The weather was great this morning, so as well as putting out washing to dry, I was able to take the horse out for a coat of spray varnish. You may look at the pictures and wonder what is going on with the horse’s tail – after curving down to the back legs, it widens a little and ends in a barb or sting just between the rear hooves. 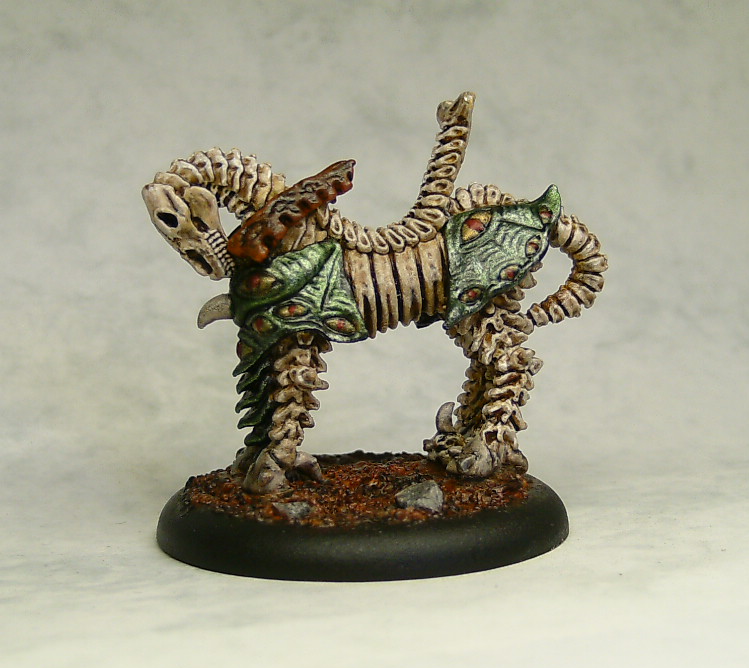 Tonight (after a few more episodes of Grimm), I should be back to the goblins and orcs (that are my remaining creatures in the Lord of the Rings figures to paint) in between a game of Talisman! 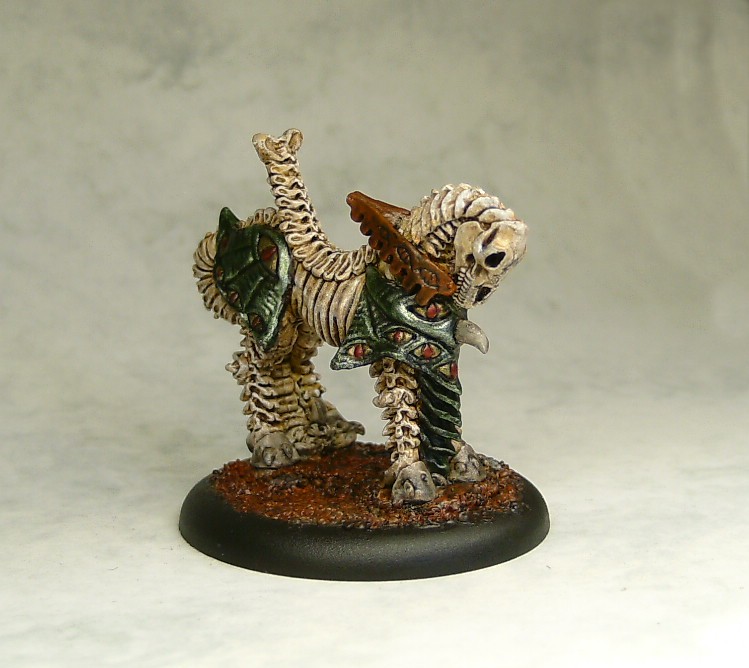 From the other side

Not quite eyes in the back of the head…