Over the last two weeks I’ve been doing some painting, mostly in between battles in ‘World of Tanks’ of an evening.

I’ve got ten figures that have all been re-based and I’m steadily working my way through painting them. Mostly I’ve picked a colour and used it on a few figures, and occasionally focussed on one figure. They are mostly Citadel figures – predominately Warhammer and Hero Quest. I’m painting my first Reaper Bones figure here too! Four metal, six plastic. Most are general adventurers/heroes, but there are two that stand out – one Orc (a Black Orc Lord/Chief from Warhammer) and a ‘Snotling Team’. This pair of snotlings isn’t an available figure… I took two small humanoids (presumably snotlings) that were extras from something else I had (Citadel Warhammer), cut them free from whatever else they were with and stuck them together on a base. This was done a few years ago for a friend who decided to play the Snotling Team in one of our Hero Quest games – based on a fan constructed Hero class. They may never actually be used again, but I’d like to have them painted! 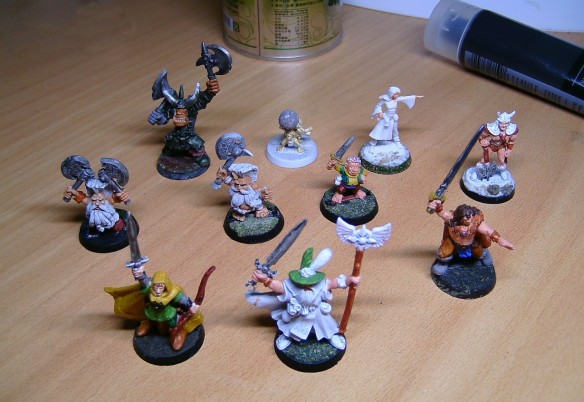 This group is nearly the last of my unpainted heroes/adventurers. Future projects? I have a set of Dungeon Quest heroes (I think its a dozen) that I’d like to paint at some time.  I’d like to move onto some of my Orc/Goblin/Skaven leaders, and I’ve also plans to paint the survivors for Zombicide: Black Plague.