Phantasm Chasm is a 1st edition AD&D adventure released in Dungeon #14 back in November 1988. I bought a fair number of issues between 1988 and 1993 and have used quite a number of the adventures over the years since. (It’s also become easy to track down digital copies to fill the gaps in my collection.) Even now, I can go back and find something I haven’t run before that can easily be updated to 3.5 or Pathfinder.

This adventure and the next one (for a later blog post) are both set in mountainous terrain and involve bandits and ambushes – just the sort of gaming set-up I wanted. I devised some mini adventures to lead into the two main ones and thought the mostly single session parts would be a welcome change from the sprawling adventure my group has spent the last five years completing. (What happened to those days when we might play four times a week?) Off-topic: I’ve updated my 3.5 Campaign page to cover the recent D&D sessions we have played, including this one.

The introduction: The characters discover the body of a man at the edge of the road. Apparently a mountain hunter or trapper, he has been stripped on anything of value and an orcish sword is still stuck in the corpse. Tracks lead to four more human corpses and a dead orc. All weapons and other valuables have been taken. At least a dozen humanoids of medium size have moved around the bodies and headed into the hills.

The background: Two illusionists (6th and 8th level) have almost taken over a tribe of 30 bugbears and convinced them that attacking adventurers can be more profitable than waylaying travellers, merchants or attacking villages. They have raided a tribe of orcs and captured some mountain hunters – using them to set up fake ambush sites along the main trails and roads through a mountain pass. Within a box canyon, they have what appears to be a small orcish camp. If the bugbears placed to watch the trails sight anyone approaching, one of the illusionists flies over them (invisibly) to see if they are worthwhile targets. A dozen orcs sit or stand around a fire near some ramshackle huts, while the illusionists and bugbears use the huts, massmorph and invisibility 10’ radius to hide in ambush.

Alterations: Originally designed for a party of about 6th level, I wanted to convert it to 3.5 D&D and make it interesting for a 12th level party. I changed the NPC’s to a 8th Sorcerer and a 9th Wizard (Illusionist) and the standard Bugbear warriors to 1st Fighter/1st Rogues. The two bugbear leaders and chief got a few extra Fighter levels. A wand of invisibility and a couple of castings of Invisibility Sphere meant I had hidden bugbears that weren’t likely to be noticed before they attacked.

I wasn’t expecting the 28 bugbear warriors to be particularly challenging after their initial surprise attack. With only a +7 morningstar attack they were only going to hit most of the party with very good rolls, but 35 hit points meant they weren’t going to be knocked down by a single blow from a PC. Essentially the adventure starts out with a few surprises for the party, but you could say the ambushers learn they have “bitten off more than they could chew”. Both casters were meant to be more effective, with defensive magic like blur, mirror image and shield (plus stoneskin for the wizard) combined with offensive spells (blast of force, darkbolt, confusion, friend to foe, shadow binding, etc). [In the original, the casters had little more than chromatic orb, colour spray and hypnotic pattern.]

The sprawling canyon on table-top

In first and second edition D&D I doubt that many people thought about the scale of maps in the adventures they were using. For third edition, with miniatures playing a big part, the size of the canyon map in Dungeon came as a shock when I started to look at actually presenting it as a battle-map. It’s approx 140 feet across and 260 feet long. The final product (1” = 5 feet) is composed of 20 sheets of A4 paper – thankfully we were playing on a large table!

The D&D Session: Thankfully my players started off by doing exactly what I wanted of them – they investigated the bodies and followed the trail. They moved up to the trees at the edge of the canyon and made a few minor preparations. Their wizard (invisible and flying) looked into the canyon, noted the orcs and even looked at the huts – spoting figures inside them. The group decided they might be captives and so the wizard put a maximised fireball into the middle of the orcs, aiming to not to hit the huts. He was quite surprised when all the orcs were vaporised. (5 hp doesn’t go very far.) Most of the other players moved in and the bugbears in the huts came out. This is when the cleric realised how big the area was and found she couldn’t cast beneficial spells on the spread out party all at once. Then the invisible bugbears started to pop-up around the party members away from the central melee, flanking in most cases. The two enemy casters begin to throw spells, and unluckily (for me) one failed a save vs a disintegrate spell and was gone. The other, like most of the bugbears lasted a few rounds more.

In Summary: It was a fun session – more interesting than a straight out fight. The players had to think a bit more than normal, more movement (not a 5’ step to another opponent each round) and certainly not the situation they had expected. If I was to do it again, I go with one of two options: 1. Less bugbears with more fighter levels to give them a better chance of hitting, or 2. Use a different humanoid with more HD, like Harpies or Minotaurs.

ZBP: Wulfsburg and a Knight’s Pledge

I spent the first six months of this year steadily working through the original quests of Zombicide: Black Plague. Win or lose, it was great fun playing the different Survivors and trying out equipment. The only problem: I was having trouble waiting for a greater selection of Survivors!

July: I received a large box with my Wulfsburg expansion and a hoard of extras. I couldn’t believe that people had been whining about how long it took to get this. People were saying they would never support the company again and that they would have been better keeping their money and buying Wulfsburg in a retail store. Okay – some people got Wulfsburg after retail shops did – but for the price of the Wulsfburg expansion, I got ALL THIS, plus dice and a nifty dice tower:

Okay, the doors are extra, but you should get the point – it was worth the wait. (By the way – the doors look great on the table, and I’ve also been using them for D&D. With all the cards I’ve got, I wish I had a card holder set too.)

The quality of the figures and parts is still excellent. The SIZE of the new abominations is incredible. One of the first things I did was buy a plastic box to keep figures in. Now everything else for the game fits in the original Zombicide: Black Plague box. I’ve got a fabric shopping bag with long handle to carry the two boxes around.

The extra survivors are great fun to use and add a lot more variety to game-play. Some skills are much more useful than others. We choose survivors at random for a game. (If I’m playing two survivors I randomly take three cards and pick the two of those that I want to play.) The new equipment is great – interesting and diverse. The “magic items” just can’t be discarded – you’ll want to hang on to them until you reach the right danger level. (Eg: Storm Bow, range 1-3, 3 dice, hit 3+, 1 damage. Roll 6 and +1 die.) The new cards about double what you started with and this means it can take a lot more searching to find torches and dragon bile. This is balanced by weapons that can either light dragon bile or be discarded for dragon fire. There’s also a vault artefact (Heavy crossbow) and a magic weapon (Vampire crossbow) that do 3 damage. 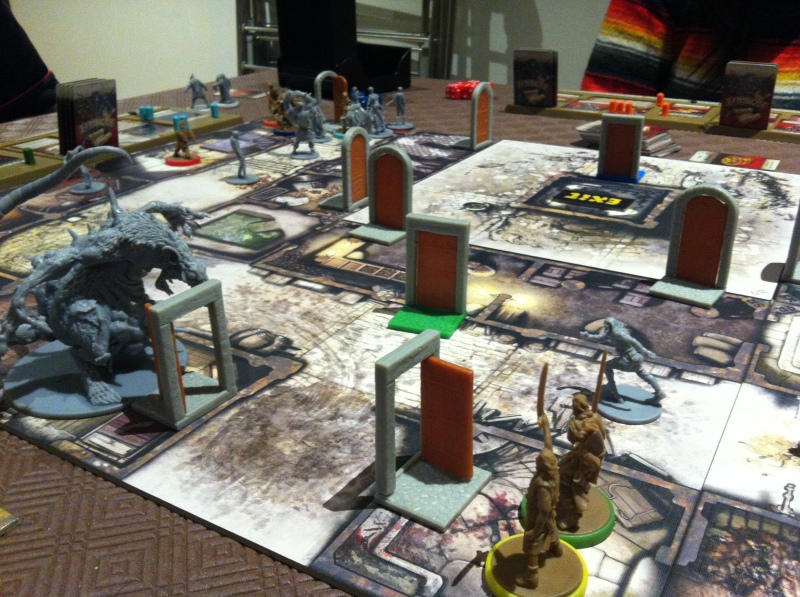 The rats sure grow big around here!

We finished the last two Wulfsburg quests on Sunday, with one restart. I felt the Wulfsburg quests weren’t as well balanced as the originals and we found some to be easy/medium rather than medium/hard difficulty. That could simply be the randomness of the game and my spawn deck.

We haven’t tried any of the alternate Necromancers (two standard Necros on the board at one time is dangerous enough so far), and my spawn deck currently includes nearly all NPCs, all wolfz, and 2 cards each of Ablobination & Abominarat. I think we have reached a stage where I could throw in an Alpha and Minotaur/Troll. Using all the NPCs makes for an easy game, since most of your spawns (regardless of danger level) become walkers, so I feel those cards need to be balanced with wolfz and abominations. 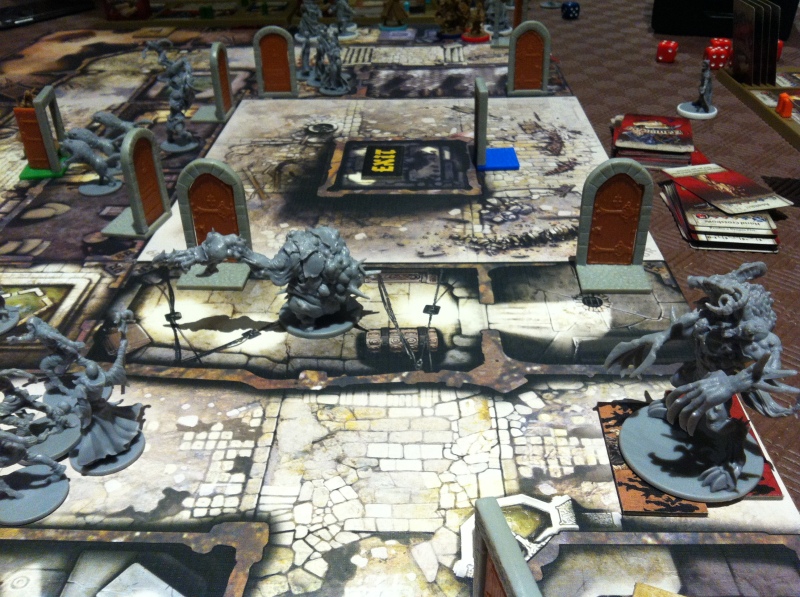 Who’s got the Dragon Bile???

I’m really looking forward to painting the abominations. I also want to try a game where we throw a bit of everything into the spawn deck and just see what happens. I think we’ll play through the two campaigns next, then maybe go back to some of the original quests and make them harder with extra spawn cards.

Overall, this has been a fantastic kickstarter. I’m thrilled with the quality of the product, the amount of stuff I received and the game play itself. Thank you CMoN and Guillotine Games!

Back to the Blog

It’s been nearly three months since I posted anything! I’ve been busy on an assortment of things but just haven’t got around to posting any details. Here’s a summary of what’s kept me busy in my spare time and I’ll follow this up with more detailed posts on each subject.

I’ve been reading a lot, watched a few movies and played some of my usual online games. The ‘Legion’ invasion prelude for World of Warcraft got a bit of attention over the last month, but now that Legion has launched I don’t see myself doing much on WoW until Christmas. I’m always at least one release behind and I only play seriously (paying for a months subscription) once or twice a year. Most of what I was busy with last time was Cataclysm/Pandaria related.

Here’s my most recently completed miniatures. These are all Citadel figures, collected when I was playing Warhammer Quest. The Orc was very overdue to be finished – he was originally undercoated and had his armour mostly done 18 months ago! I should do a little bit more with the Elf – ink on the cloak brought out the edges, but should be cleaned up slightly. 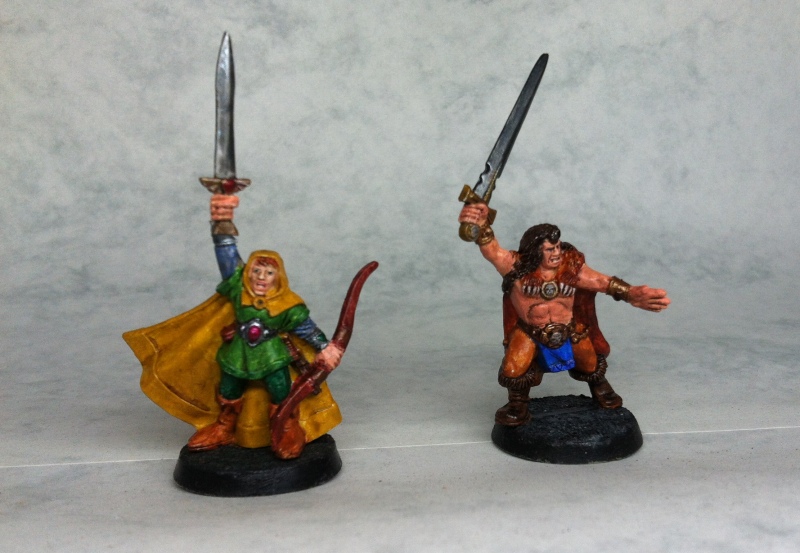