I have two of the standard Necromancers, plus four specials (two of which are also player survivors). That’s six figures done and they were fun to paint and look good on the board – in particular it’s great having the standard necromancers stand out from the regular zombies. I’ve followed the standard images as a colour guide with small variations for all but one figure.

Back when I painted my dark elves (Drow), I’d been reading about how black doesn’t always come out well when painting figures – its hard to shade and highlight to pick out detail. The necromancer cloaks are painted with black mixed with some grey, making a very dark grey. Red for the cloak sash and arm bandages. Silver over the dark grey with the armoured legs and boots, brown then copper for chains, brown rods, dagger hilt and beards. Straps/bindings on the bottles and raised skull proved a nuisance – I need a new brush for fine lines. Some ink to shade the face, skulls and bandages, and a then white highlighting on skulls. 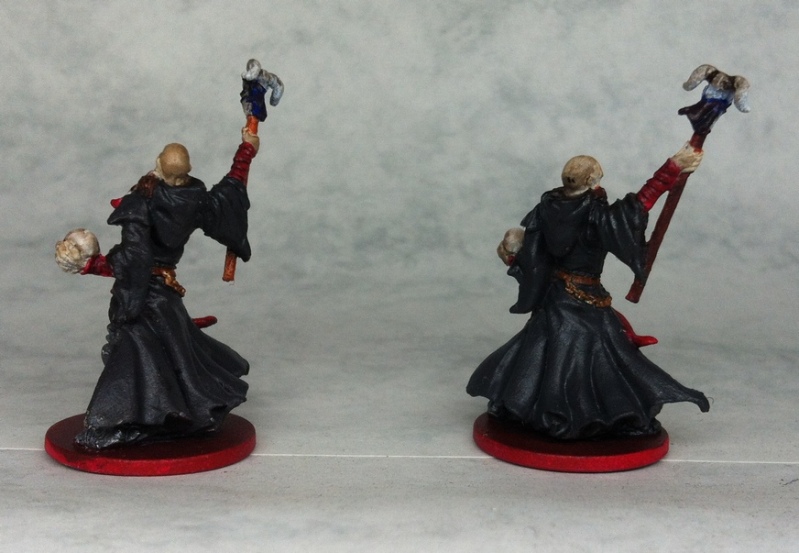 I may come back to these later. They could do with a little more shading and highlighting on back on the cloaks.

Evil Troy – better known to many as “Evil Ash” (Bruce Campbell) from Army of Darkness. The figure wears a breastplate (rather than armour banding over his shirt as shown on the card and in the movie) so I went a dull gun-metal with silvered edging. I choose a red cloak to match the movie rather than blue-black on the card. I don’t believe the eye sockets are well formed on the figure and were very difficult to paint. My final result is mostly black with a bright orange pupil in the middle – which hadn’t come out in the image above. Light reflection makes the skull helmet look silver rather than the white it actually is. Gameplay: When killed, put him back in his spawn zone, unless killed with a 3 damage attack/Dragon Fire.

Grin – or more commonly known as a medieval “Joker”, from the Batman comics. I pretty much ignored the card colours. The Joker usually wears a purple jacket and pants, yellow vest and green shirt – so this became the basis for the clothes on the figure. I liked the blood effect across the chin on the Z:BP image, rather than just red lips, so kept that. I don’t like the jawbone on the end of the staff – at some time in the future I may cut of the end and replace it with a standard human skull (with red mouth?). Gameplay: When he moves, he moves up to two zones instead of one. 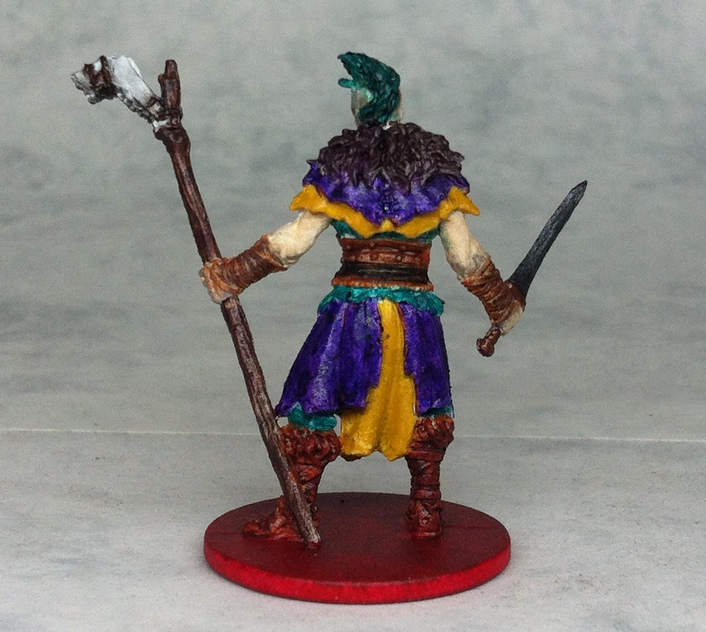 Ostokar the Pale – a “Naiade” special guest figure from french artist Xavier Gueniffey Durin. You can look at more of his stuff here. Originally I was planning on grey rags that got darker with each lower “layer”, and ended up with a bit of both green and brown over the grey and shaded that. Mostly gun-metal on the chains with some silver highlight and various colours to detail belts, sheath, straps, etc. Gameplay: Each time he gets an extra activation, all zombies in his zone also get an extra activation.

Ostokar has been used as a survivor in one of our games so far (I enjoyed using Zombie-link), but not as a necromancer. I like the look of the figure and there’s some flexibility in the chains, which means they are less likely to break through handling or being packed in with other minis. 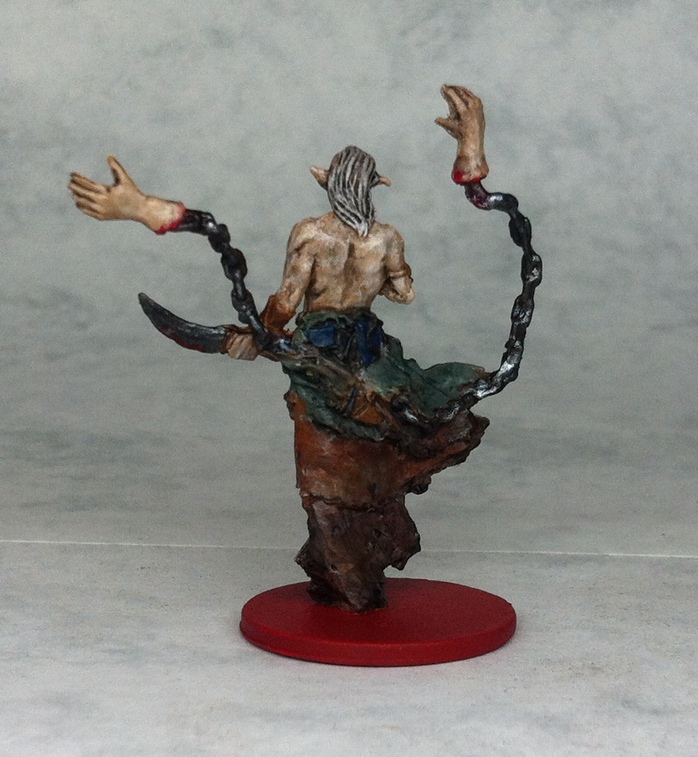 Queen Medea – or “Queen Ravenna” (Charlize Theron) from the movies Snow White and the Huntsman and The Huntsman: Winter’s War. There’s some debate that CMON should have used the pose on the card rather than the final sculpt (dagger held in front not over the head) and I agree – although it’s still a nice figure. The red lips look a bit too bold in the image here, but don’t stand out so much on the actual figure. I found an online image where someone painted her in dark blue (rather than the black from card/movie) and liked the shading to almost black in the dress folds. I’ve used a lighter blue for the bodice than the image I saw, and managed a better effect with shading/highlighting than I usually try for or achieve. Gameplay: Cannot be eliminated if there are other zombies in her zone except with Dragon Fire.

That’s all for now… I’ve got wolfz and abominations I can start on, but I might spend a week on something else before I come back to Zombicide. I hope you enjoy the pictures and have fun if your playing Zombicide!

The regular abominations seems pretty minor in gameplay now (we have the wolf abominations, two rat cards and two blob cards in our regular spawn deck), except when they show up very early in a game!

Two standard abominations ready for use.

Painting these guys was fairly straight forward – pale flesh, coloured in the rope & bits of clothing, and light brown ink for shading. I did try something different in the middle of this, after the initial flesh base-coat.  I mixed a little green and grey with my flesh and mottled patches of the skin. It looked a bit too strong and overdone, so I went back over most of the exposed skin with a paler skin colour (called “fair maiden” – I use it mostly for pale ‘elf skin’, or highlighting) and that blended the skin tones nicely. The ink then darkened everything to a nice finish and I spent a little bit of time highlighting muscles and then teeth, eyes and blood on the fists and arms.

Abominations – Rear and slightly out of focus

The Ablobination has been the most annoying figure to paint of all the Zombicide miniatures.

Originally, I wanted to copy the appearance from the leaflet – a greyish flesh with purple tinges. I started painting this right at the beginning alongside the ‘rat, and it was the very last to finish (even after necromancers).

I looked at a few online versions and didn’t like the look of the one purple toned figure I did see. I didn’t like an all green one I’d seen either, but wondered if I could get something between the two that would look okay. I started with a light grey base coat and then some green shading – not happy. I repainted most of the skin in flesh tones and only felt that was a slight improvement. I could have gone the same style as the Abominarat (flesh, browns, etc – there’s spikes and warts!) but I wanted something with its own distinct colours. At this stage I was only happy with my brown leather/clothing scraps on the figure. My next thought was to go with a more fleshy style so I used a red ink over the entire figure. This replaced all the remaining green and gave me a dark shading which I didn’t mind. I then spent time going lightening the flesh and adding some dark pinks and red/browns to emphasise shading or detail the markings on the skin. The claw got a bit more red to suggest muscle rather than just stretched skin and my fair maiden on claws and the head. Some ink darkened the claws and helped pick out head detail, with a little white highlighting – trying to make the head as skull-like as I could. Black spikes, hints of yellow on some of the lumps/warts, and orange in the eye sockets with yellow pupils.

That only leaves two Abominations to paint – the troll and the minotaur. Like the rat, these are very large figures, so they should be easier to paint, and I expect to have a lot of fun with the minotaur – probably something between my existing minotaur figures and the leaflet picture. They have been undercoated and I’ll probably start them during the week unless I get stuck into another project.

It’s taken me a week (multiple attempts, time and lighting) to get a good set of photographs. The painting itself was over three or four weeks and has been some of the most enjoyable miniature painting that I’ve done. The largest figure is about 90mm high, making a wonderful change from trying to get detail on something like a 20mm halfling. I had a good idea of colour schemes for these figures – mostly following the published images/cards/rulebook. Most of them got used in a game before I’d finished everything and they’ve had plenty of favourable comments from friends over the last month. They’ve all had two solid coats of clear acrylic since I expect to continue playing Zombicide fairly often – and the figures get a lot of handling.

The first figure I really started with was the Abominarat and I had a ball! If I had spent that much time on anything previously I would have been really tired of the painting and just wanted to finish and get it out of the way.

I started with a base coat of flesh, then started building up the fur and trying a few different colours to bring out the skin folds, spikes, lumps, etc. Brown ink shading (I’m so happy to have been introduced to Army Painter Quickshade – thanks Azazel) darkened everything and brought out some of the detail. I slightly prefer the lighter flesh tones on most of the rat that I had before the quickshade, but to highlight most of the skin back to something lighter was too much work. I highlighted some of the fur and went on with pinks and yellows for all the growths, then spikes, teeth, eyes, etc. The ‘rat was impressive on the game board simply because of it’s size – with colour it really stands out now – as do the other abominations. 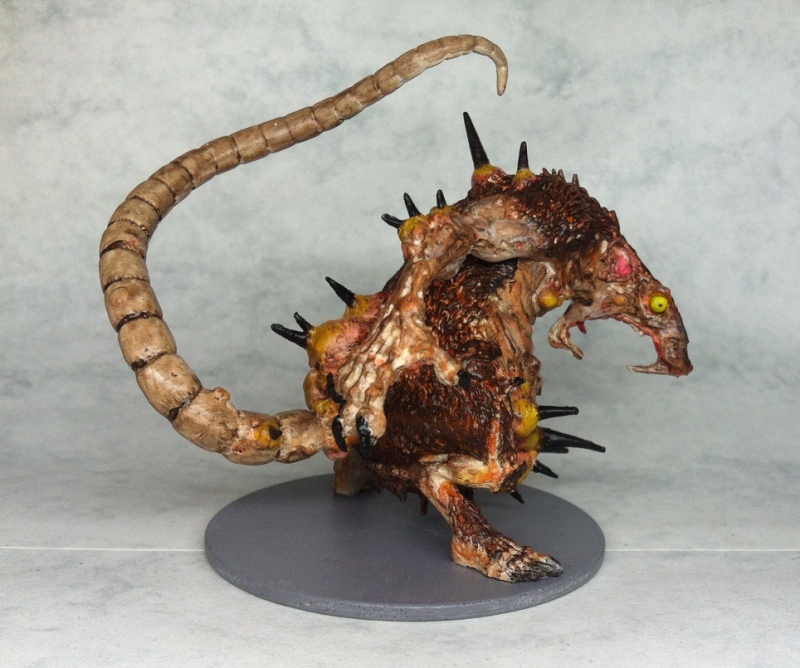 As well as looking through my rulebooks & leaflets, I spent some time browsing the internet to see what other people had done and watched some YouTube painting video’s. There’s some very good stuff around. I’ve kept images of most of the abominations, necromancers and survivors to use as a guide. It’s easier to load an image on a screen than be peering at a card while painting. 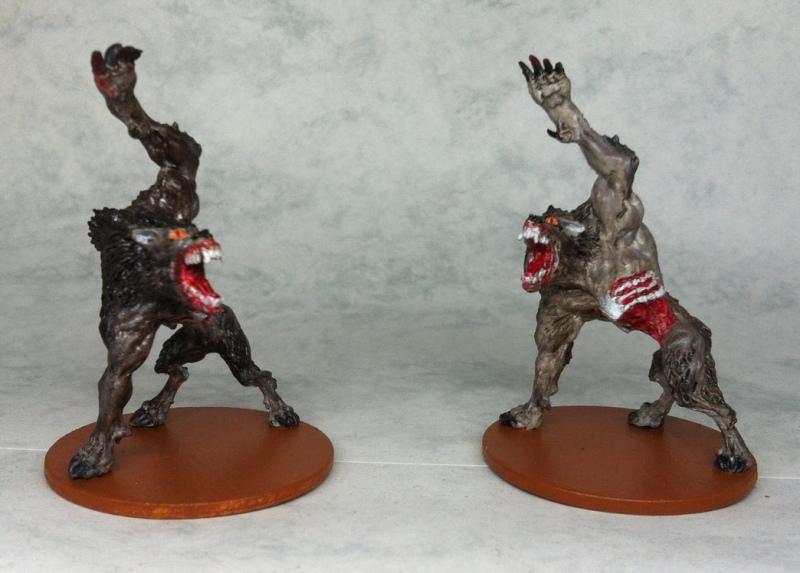 I thought the wolfbominations (I’ve got two) might be easier to paint than most of the other minis so they came next. One wolf was base coated in light grey (mid grey fur) and the other in mid grey (dark brown/black fur) – and that’s most of the work done. White on ribs and teeth, a dark pink/red for exposed flesh and around the mouth, touched up after ink shading with bright red. A little bit of highlighting on the limbs, black on nose and claws and fluoro orange in the eyes. A little extra red for blood near teeth and on the raised claw. 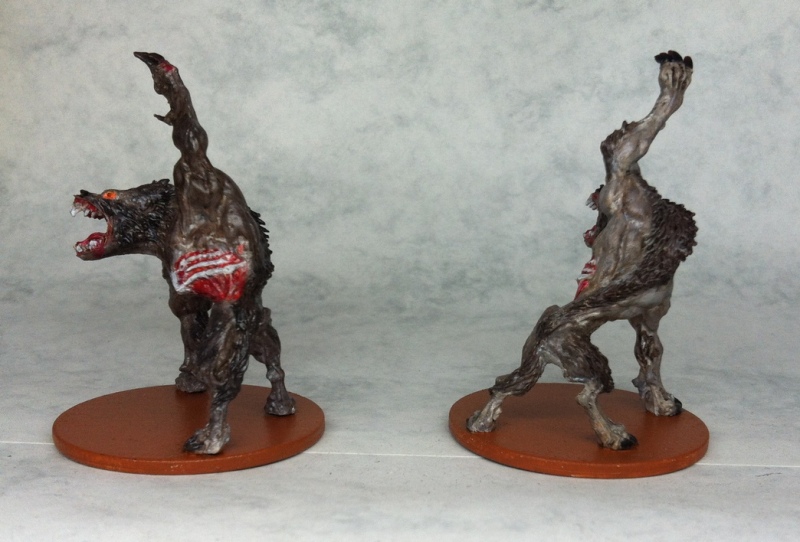 Side and rear view

They came out very well, and I’ll use the same principles to paint all 24 of my wolfz later. They are already undercoated, and will be good to see how I go with a large group of multiple similar figures. I’m considering three base colours – light grey, mid grey and light brown. I don’t plan on painting all the general zombies (walkers, runners, fatties) but the wolf abominations were fairly quick and the zombie wolfz should be too. Plus, I don’t have any wolf figures in my general D&D miniatures collection and if I don’t paint the exposed flesh of some of the wolfz they can double as normal wolves in other games.

Now when they turn around, everyone hide!