I finished this figure last weekend, which is much too long after I started it. I could have finished it to a better standard, but after all this time I just wanted it done! 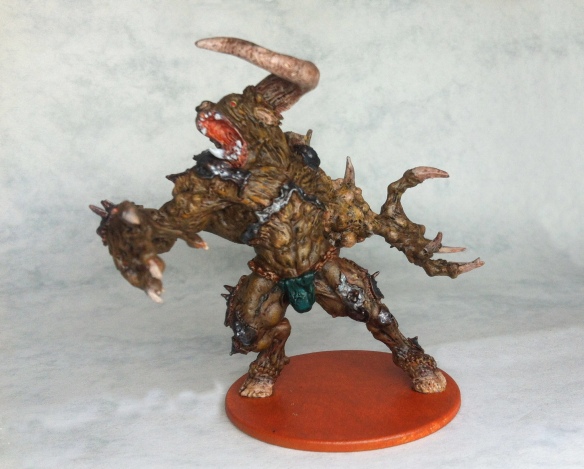 Originally, I base coated the figure with burnt sienna, but that looked rather more orange than mid brown. After putting some different colour on various parts (mouth, horns, claws, etc) I went over the skin with a better brown, did a bit of highlighting to claws, horns and the tumors/lumps on his back and arm. I inked it next to get some dark shading in skin folds, etc, but it didn’t work as planned – the overall brown darkened more than I’d expected and I ended up with very little ink sitting where I wanted it.

This meant a lot more highlighting to lighten raised skin/ridges. Then I did more detail/highlighting, particularly on the swollen arm. Finally teeth, eyes, some touch ups to claws and hooves, and copper on the chain belt. Gun metal on the metal/armour plates and a little black ink on most of those. Some darker brown in grooves or behind other pieces that stuck out to hide bits of the base coat that hadn’t been covered, etc. Fluoro yellow in the eye sockets and some bright red on the eyes over that.

The weather was good today, so he got spray varnished this morning and left out to dry. I’ll probably give him another quick spray coat tomorrow.

There’s nice detail on the figure and it wasn’t a hard paint… just time consuming when my ideas didn’t match what actually happened during painting. I’m very pleased to have finally finished all my Zombicide Abominations now!

I finished painting the Abominalpha about three weeks ago and had hoped to finish the minotaur as well and post both of them. The minotaur is nearly done, but light was good this morning so I finally got some pics of the Alpha! The photos came up really well and show the colour and detail as I see the figure, with the only exception being that the claws are slightly darker (and flecked with black) in RL.

A long, hot and humid summer in Melbourne meant I really didn’t feel like painting for most of Feb/March and only got back to the last two Abominations in April. I really like the Alpha figure – good sculpting and lots of detail. It wasn’t until I started painting and paying a lot of attention to the box pamphlet image that I realised he’s wearing human skin – there’s two feet hanging down at the front!

I started with a mid grey base coat, rather like my Wolf Abominations, and a dark blue-grey on the arms and back of the head with the longer ‘fur’. A little dark brown ink (or black – I can’t remember now) for shading. A mix of yellows and light browns for the skins, and some brown ink for detail. Then lots of white dry brushing all over – I like the white fur of the original image – and over the grey I feel the shading/highlight has worked really well. I wanted a dark constrast with the horns and thought black wouldn’t show the detail there, and tried red over the gray base-coat. This looked good and got some black paint that sits in most of the grooves. I’d had a few ideas for the claws that didn’t seem to work and after the way the horns worked, decided to do all the claws the same way.

I could have done some more work on the skins, but I’m happy with the look I have. I would have liked to do more with the shrunken heads, but anything better is beyond my current ability. Look at this site to see what someone has produced – I don’t know if their heads had better detail, or they have steadier hands to create the detail and better painting skills! (Probably the latter from looking at the claws.)

I might take him out this afternoon for another coat of spray varnish while the weather’s nice!