This will be my last post for 2017. Tonight my wife and I head to Tasmania for a week, so no more painting until the new year. In any case, these three figures are the last of my Zombicide: Black Plague survivors. They are also the last Zombicide figures that I had planned to paint. Walkers, Runners, Fatties and NPCs can stay as they are. (I did paint the runner bases red, to make them stand out from the walkers.)

Hitch – David Bowie as Jareth, the Goblin King from the movie “Labyrinth”

These three were all straightforward to paint except for the beard on William. The card clearly show a distinctly bearded Sean Bean, but there isn’t a sculpted beard on the figure, so I’ve painted this on free-hand. Its okay, but I did a better job with Paul in one of my earlier posts. I feel that ‘William’ matches the clothes of Boromir more than Ned Stark. He’s only missing a horn. There’s a lot of debate over this figure, but there’s no reason why both roles couldn’t be intended.

All three are basic melee characters. I feel ‘Hitch’ could have had at least one magic skill to fit with Labyrinth more, but Slippery and Taunt suit the role.

This brings my painted figures to 95 for the year, which I’m very happy with. I would have liked to hit 100, but that can be a goal for next year. After I finish the 14 Star Wars mini’s that sit undercoated on my desk, I have a strong temptation to paint all the figures from my ‘Space Crusade’ board game. 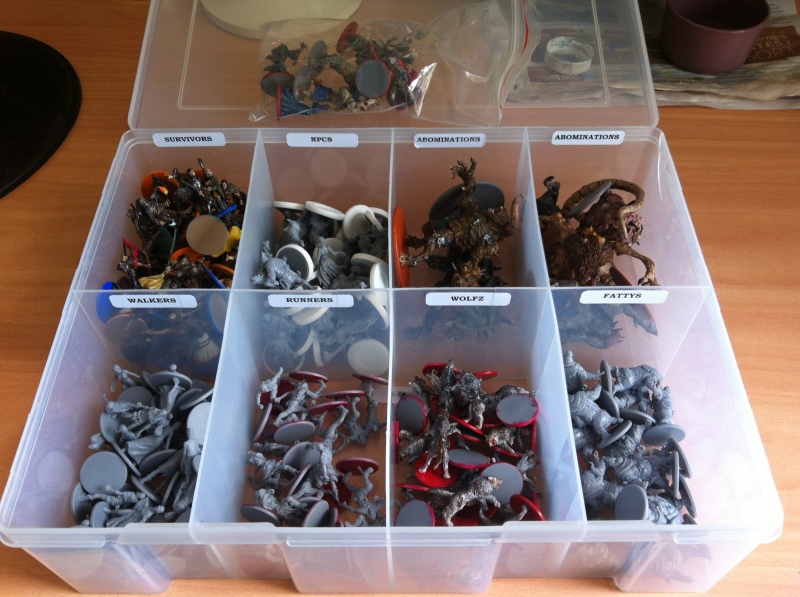 For my first post next year, I might get all the painted Zombicide figures out and take a group photo!

Best wishes all for Christmas and the New Year!

EDIT: One of those axes that Scowl holds broke when I started on the figure. I superglued it back on, and its still holding together mid-2018, even though the figure has been in and out of the storage box many times. This is the only breakage that has occurred with the nearly 200 figures I have for Z:BP! 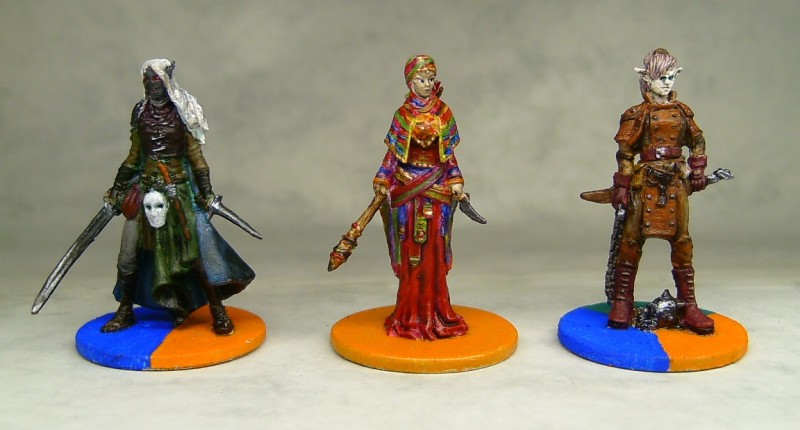 These were all interesting to paint. Both Morrigan and Merieil have a considerable amount of detail, although the colours shown on the cards don’t make it stand out. Antha is the complete opposite – a fairly basic sculpt, but the colour is everything! I didn’t follow card colours exactly in each case.

I can’t look at Morrigan without thinking of a female version of Drizzt Do’Urden, and I can’t be the only one. I made slight variations with colours, mostly to give a bit more contrast in clothes and equipment. My dark elfs (D&D background) have almost black skin (and red eyes), not the pale grey of the card image. I messed things up doing this – I had just the right blend of really dark grey (almost black) painted, then decided to remove the strand of hair that hangs down over her face. It had been annoying me right since undercoating. This meant having to repaint the face again, and I didn’t get the colour quite right – too much black. I’ve managed to lighten the skin tone a little, but not quite back to my original plan. I stopped before I make things worse. I’m still thinking of a hint of detail on the boots, and the mask (maybe red not the black/grey on the card).

Antha’s sculpt really only has simple crossed sashes at the front and the “dangling strips” that define lines of colour. I’d thought that painting her with any accuracy was going to be very challenging – but once I got going, I was actually having fun. There’s more free-hand detail there than I would ever have expected to achieve, but with a really steady hand and a really fine brush more could still be done. I’m thrilled with the final look.

Merieil was a nice sculpt and fairly easy painting. There’s some detail sculpted that’s not on the card (elbow & knee pads) and I reversed the hair and skin coolours. I’m not used to elves with pink/purple skin, so I went with my “fair maiden” pale flesh and some “lavender” over white for the hair. The skin didn’t work out quite as smoothly as I’d have liked, but it’s not quite as bad as it looks in the photo.

I’ve got two survivors to go – three to show, but one already painted. I’m going away for the last week of December, so I don’t expect to get any more painting done except for the final Z:BP survivors this year.

The weather in Melbourne (Aust) is extremely confused. November/December has gone from record breaking 30+ temperatures to cold and nearly flooded (a month’s rain in a day?). At least cooler weather means I’m happier to paint, and I look like finishing my Zombicide survivors before Christmas.

These three are all movie/TV characters:

These three were fairly good to paint – nice poses and sculpts. I looked at images on the web to get a better idea of details, which didn’t always help. For example, the Lady Faye figure has a rose emblem on her shield – but in the movie it’s a tree. I painted it red just to be simple. Mel gibson wore tartan in the movie, and I tracked more images (and the tartan) down. The card doesn’t show the tartan – its shows a plain dark brown cloth. The actual tartan is a pale grey/reddish-brown/darker brown pattern which I attempted to paint but didn’t do very well. I didn’t want to try and clean it all off and start again, and gives a bit of variety in the colours of the figure and looks (unintentionally) blood spattered. Xena is surprisingly quite accurate with colours and design (card vs TV series), but I may go back and touch up some detail with gold or bronze metallic, rather than leave the mostly silver detail.

All the survivor’s skills are pretty much straight forward melee. While the “Xuxa” figure holds a bow, she has no specifically ranged skills.

There’s only six survivors to go, and I have two painted already. I’ll keep painting and hopefully have two more sets of three to post over the next week or two.