We are nearly halfway through 2018 and so far I’ve painted only ONE figure. After working through my Zombicide figures last year, I expected to make good progress on other painting projects this year, but it just hasn’t happened. My one week Christmas-New Year break was spent in Tasmania, and work has been increasingly busy since then. Most nights I’ve read, done some typing, watched some TV, and played some Lotro (Lord-of-the-Rings Online).

The single exception is a WotC D&D “Giant Scorpion” that I purchased through eBay, that came entirely in a disappointing black. It really didn’t look pre-painted at all. I spent an afternoon repainting it to something that you can actually see detail on.

What I’ve really spent time on this year is writing a Pathfinder D&D megadungeon – FalsKrag:

Early last year, when looking for Gamma World material, I found a blog with a player in a GURPS Gamma World Campaign. I got more interested in his blog as I started reading more of the megadungeon campaign that he runs – Felltower. The more I read on his campaign, the more interested I became in doing my own. (Thank you Peter for so much inspiration!) I decided to start with “Beginnings” a short adventure (written a year or two ago) for new 1st level characters that explains how they get together from different places around the world of Greyhawk and become an adventuring group. The main adversary and finale in that adventure provides a perfect lead-in to my megadungeon.

I looked for somewhere in the world of Greyhawk to place my ruins and mountain dungeon and by chance zoomed in on a map and found three places on a river close to the border of three countries – Falsford, Fals Keep and Falsridge. It’s also right next to a minor mountain range, with valleys, forested areas and a heap of humanoids. I didn’t intend to copy Felltower in name, but this seemed the perfect set-up for my adventure, and the more I read on the politics and history of the area, the more I knew I had a great location. So the ruin of Falshold, on the mountain of FalsKrag was born. 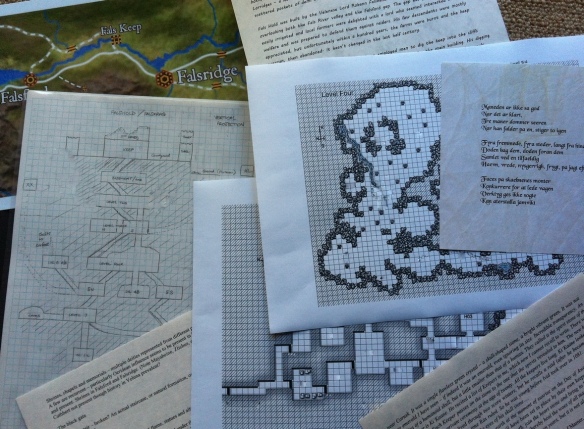 I’ve now mapped and detailed about 12 areas (or levels), for the ruin and dungeon. I’ve got a family history for the ruin, a past timeline (covering 500 years), details on population of the three “towns” (numbers, types of classes/levels of inhabitants, shrines/temples, etc), a growing list of expanded rumours, and three detailed sections of legend/history that I’ve worked around established Greyhawk history of the area, that have an impact of the dungeon or a particular part of it. It’s been a lot of fun writing it, and it hasn’t mattered if I’ve got sidetracked looking up odd Greyhawk info in my many books and resources. I have a heap of player handouts, some colour maps, a growing set of Hero Lab portfolios with monsters and NPCs, notes on the different greyhawk races/cultures (complete with real-world language notes to offer a printed version of any text in Baklunish, Flan, Oeridean, or Suel), a new fully fleshed weapon of legacy (and plans to utilise and rewrite three from the book d20 3.5 ‘Weapons of Legacy’) and sets/groups of magical and mundane items in and around the dungeon (for example, an NPC group from 200 years ago had weapons made here) that may be found or be required for something. I’ve got notes for future levels/creatures/NPCs/legends that I’ll expand on as I feel I’ve reached an appropriate place to put them.

While this won’t be a full sandbox experience, it is distinctly not linear, nor static, in dungeon layout and with it’s multiple story-lines. There should be many choices (rumours, legend, exploration, locations, etc) that players can choose from to investigate in any session. My group of players are primarily hack’n’slash, but they don’t mind the occasional puzzle. There are things that shouldn’t be found or understood on the first “pass”, things that will happen as game-time passes, and consequences to party actions. I’ve got events/locations where what happens relates to particular days of the month, or how long before something happens after the party trigger a particular thing/event, detail on how creatures react to the players, whether some groups have friends or get reinforcements, etc.

Overall, I’ve put a lot of work into this (60-70 typed pages, plus maps and handouts, and lots of handwritten notes) and I’m having a lot of fun writing it. A week ago I wanted a fungus or lichen in a particular part of the dungeon – I now have 10 different “herbs” with type, preparation and effects to use, mostly drawn from MERP. I plan to expand this now that I’ve found that Paizo’s Ultimate Wilderness has more.

The second half of “level seven” awaits…