This took me a bit longer than planned, mostly because I got sidetracked by non-painting activities.

These are all Games Workshop/Citadel plastic figures, most of which I purchased to use with Warhammer Quest. The orc warriors are from the Hero Quest game. (Pictures can be clicked on for enlargement.)

8 orc warriors – 2 with flails, 2 with cleavers and 4 with scimitars.

Like with my goblins, one of the orcs broke his sword in combat. The original sword is long-gone and the only bits I had to try and replace it with were too small. So I just trimmed it and he can hold his fist up in a threatening gesture.

I’d originally painted the orcs in flesh tones, generally darker flesh than I use for most humanoids, not green since I use most figures for D&D not Warhammer. I got sidetracked looking at different Orcs in RPGs and realised that my ideas of orc-flesh were closer to what 1st edition D&D had described, and weren’t “current” compared to recent editions. I’m not going with greyish skin, but they all did get a black ink over the top to darken their skin!

Each group is painted in almost identical fashion – the orc archers have different coloured pouches as contrast. Unlike the goblins, these guys are meant to look like a unit. While the archers have mostly yellows and greens, the warriors are mostly browns. I did use a dark fushia on nearly every figures pants (more obvious on the warriors), red for belts, and the same brown for boots. I have the same fushia and red on the champion too. 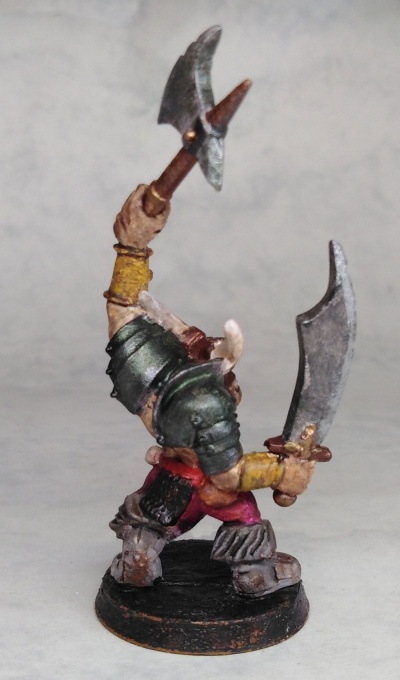 I’d previous painted a metal dark orc champion, and used the same green ink on gunmetal for the bulk of the armour to tie the two together. I’m also trying out taking photos here with a new phone. It seems to pick up the lighting better, so the images are as dark as with my previous phone (and my digital camera). Having loaded the photo, I note that I forgot to silver dry brush the champions chainmail!

EDIT: “Would you believe…” I’ve just brought all the figures in from a wonderful sunny afternoon. They have been outside drying after two coats of clear acrylic… and I found the missing orc sword! (Oh well, into the bits box.)