It’s been nearly a month since I updated this blog. We gamed four weekend in a row, and I’d been busily finishing off some sections I expected them to enter, and finish some handouts and maps. Today I’m catching up on posting.

The group had heard of crafting halls somewhere off the great stair and have been looking for them so that Seldrel can craft and/or enchant magic items without the group suffering the Geas penalties due to staying away from Fals’Krag too long. They were very happy to find them in this session, less happy to learn they were guarded/haunted, and we had some fun in game discussion with the ghost trapped there. They also got a little info on the sphere segments that Merxif has been collecting.

14th Patchwall: Seeking noise heard earlier they encounter an Owlbear in main hall. Heading south into a new set of rooms they find undead and constructs. An Iron cobra, a Minotaur skeleton, a mind-effecting Allip (an incorporeal undead that mutters), and the skeleton of a giant. While none of these are great threats, the size and damage potential of the skeletons, the poison of the cobra and the distraction of the Allip make each foe a concern. There is minor treasure located in this area., which as far a s they can tell is the remainder of the level. Returning to the stair shaft, they find their rope cut. Lanliss throw up grapnel with rope and climbs up to tie off rope properly. While ferrying people up to stairs, Bacon notes a difference in the stone across the shaft, and finds a secret door. Lanliss comes down and manages to open it. They then get everyone down the shaft and into a wide hallway, where Bacon finds another secret door. Lanliss closely followed by Bacon and Hardaz move into a room when a gong sounds and they are attacked by armoured skeletons. Two zombies emerge from side, and other undead (later identified as wights) from next chamber. Merxif blasts both zombies and two wights into dust with his blue crystal skull. The remaining two drain energy from Hardaz and Lanliss before being destroyed. Bacon’s insistence on carrying some alchemical remedies is worthwhile – soul stimulant negates the worst of the wights drain. Merxif heals before they open the next door which proves to be a tomb marked with Gregern Falshadren’s name. This tomb is open and a Mummy is here. Winter is immobile with fear, and while Merxif locates and activates his wand of remove fear, the others attack. Hardaz contracts Mummy rot. The equipment retrieved from some of the undead is the most valuable items in what they believe to be a second false tomb.

Along the main hallway are double doors marked ‘Halls of Creation’ and further on a black gate. The open the doors and their first sight is a draconic looking construct, a large brazier and text engraved walls. The creature spreads its attacks between those who surround it. Merxif heals as needed while the group slowly destroy it. A ghost emerges from one of the walls – Bai’Shah, a Suel sorcerer who was killed here about 80 years ago. He tells them that he came here with a group seeking these halls and we killed by spirits haunting the halls. He tells them that the spirits and the creature they just killed reform over about a week. He believes they can be destroyed permanently by rejoining a magical sphere and that he thinks this will also enable his spirit to leave this chamber. He has spoken to two groups before that looked for pieces of the sphere – one group were not successful locating pieces, a second never returned. Merxif shows the two sphere segments that he has kept and Bai’Shah excitedly identifies them as parts of the sphere. He believes that one piece is in an area below them, and knows that the last is hidden nearby. He will only reveal its location once the other is found. They agree to help, and he tells them of a ritual to be performed on a night of a full moon, and requiring a bell. Seldrel uses a gem key on the Black Gate, setting it to red and they use it to gain the fungi caves and then up to the Hall of the Gods. They activate the statue of Segojan (Gnomish god of Earth and Nature), then rest until early morning.

15th – Merxif cures Hardaz of rot, and Seldrel sets the gate at Hall of Gods to Orange. He now believes he fully understands how to use the gates, and could create his own ‘keys’. They consider activating another statue, and to do so decide to retrieve a morlock body. They head down to the great stair, where Bacon and Lanliss climb down and return with corpse. Back at the Hall, they use its blood to activate statue of the Earth Dragon (an evil demigod of earth and hidden treasure). All head back down the stair and return to the wide passage, passing the crafting Hall. They find a large room with columns and wolf markings. A smooth passage leads further south, and four lead of on the sides, one blocked with rock and timber has ram markings. Lanliss finds a secret panel in floor, but they decide to first investigate noise heard. Indistinct voices east turn out to be two ogres and more morlocks. 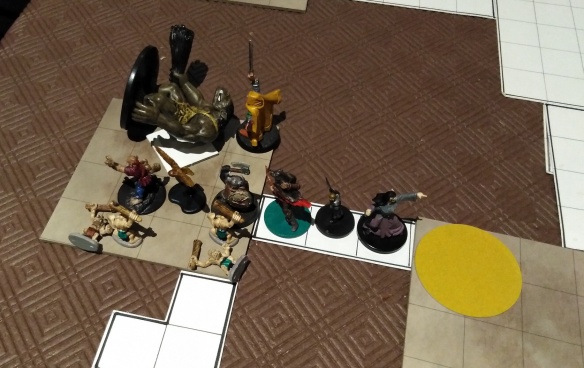 Second ogre down, and mopping up the morlocks