Dave (Scent of a Gamer) recently painted his Warhammer Quest rats, reminding me that my bats are one of the few groups of monsters unpainted from the original box. I dug them out from my boxes of figures and painted them over the weekend.

It turns out that only the skaven from the box are still to do… and of course a scattering of other warhammer figures I bought in blister packs and boxes to use with WQ and D&D. The skaven are a project that I might work on next year, but I have some chaos warriors from Hero Quest and Warhammer undercoated and ready to paint soon.

I planned to do three different paint schemes, but once I started doing red wings, I liked the look… while half of the red-wings have slightly lighter wings, and paler body fur than the others there’s really only two distinct groupings. The ones with black wings and yellow fur are based on some of Australia’s ‘flying foxes’ – fruit and nectar-eating bats. 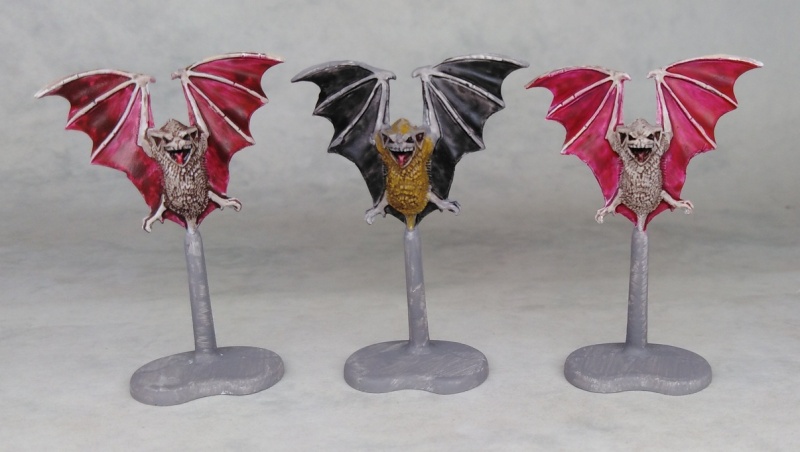 They were fun to paint and pretty easy. I could have fussed more with the fur, but they look good enough for me at this point. The bases could do with a another coat of grey tonight before I varnish them tomorrow. There were 12 figures originally, but one sacrificed its base for a flying owl figure I did last year.

Painting of this pair was fairly basic. I picked colours close to those in the painting guide and steadily worked on them over the weekend.

The guide shows the lighter furred bear as being almost white – I’ve started with a very light brown, and then lighter again on the face. Both caps wear pictured as a dark grey, but I wanted more colour, so the caps became a similar colour as their pants.

I actually played ‘My Little Scythe’ on Saturday afternoon, for the first time. It’s a fun game, simple, but not basic or boring. You choose an action each turn – to move, look for diamonds/apples, or make something from the diamonds/apples already collected. To win the game you need to get four trophies, from eight possible categories. [Collect apples, collect diamonds, gain friendship points, win a pie fight, etc.] I only got two. My mate and my wife each achieved four trophies in the same turn, and she narrowly won by having more resources.

It was great seeing nearly all the figures in full colour, rather than the white and beige plastic they started with. We didn’t get to use the bears – or I’d have taken a group photo. (Maybe next week.)  The weather hasn’t been as good as other weekends, so while they were nearly done, I wasn’t rushing to finish them on Sat. I didn’t expect to get good weather to sit them outside, varnish and let them dry. I was asked to paint a white eye spot – which is meant to be a “light reflection”, not a pupil, based on the guide. This is the first figures that I’ve actually done that for. I could update the others if required at a later time.

I think I’ll touch up that yellow ear before they get varnished.

Saying bye to a good part of my collection! (Reblog) – Túbal Villar selling, not Azazel. :)