Finally, the last skaven – unless there’s a figure or two in the wrong storage box! That’s a group of 24 all done.

I’d considered doing his robes in purple, and when I got started on Friday night realised that there’s a separate jacket over the robes. The jacket was done in fushia with the lower robes in the same but lightened with white. Then I red inked the jacket, and purple inked the robes. Everything went smoothly from there, with colours suggesting themselves as I went along. A final bit of black ink over everything make the holes and folds were distinct, then highlighting. When taking the photographs this morning I noticed I hadn’t coloured the chaos symbol on the belt buckle. That’s now been fixed.

I’ve really enjoyed these last two skaven, and I like the warlock more than the plague monk. I’m very pleased to have got through the whole group, and they make a very nice force.

Last of all, a group shot. I had a lot of fun setting this up, which is a sure sign that it’s been way too long since I’ve done any table-top gaming. I already had planned to write these guys into my mega-dungeon. Now I want to set up something like this seen to play out a really big battle. You should be able to click on the pictures for a bigger image. 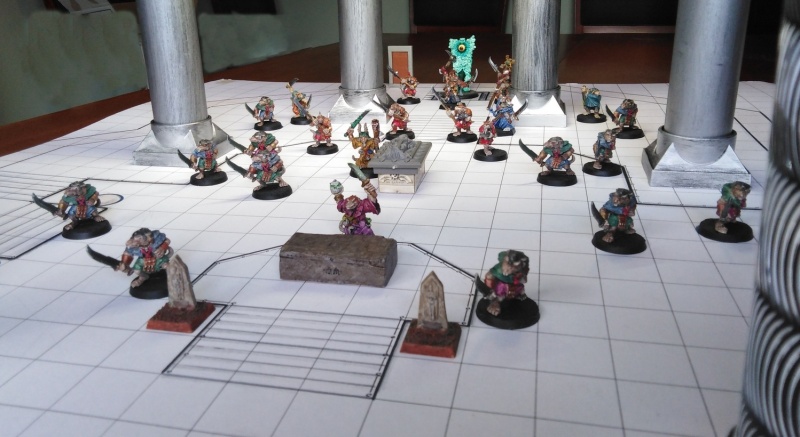