Last weekend the Pathfinder (D&D) campaign that I play in reached a major climax. We have been trying to locate the cult/family that stole three powerful artefacts (of a dead god) designed to transform someone into a demi-god/powerful monster/something-really-nasty. The temple of WeeJas (a Greyhawk Goddess of Death, Magic and Law) finally found somewhere to send us… and we arrived in the middle of the ceremony to transform one of our opponents. We weren’t able to stop the ceremony, but we did kill all the undead thrown in our way and managed to survive destroying the artefacts. The “creature” escaped through a portal to elsewhere, but we were at least able to recover enough to follow.

We were lucky to get through the portal before it closed, and but I hate being rushed… major encounters when everyone in the party is wounded usually don’t go well. I/We need to balance healing with moving onward better…

What’s worse than a Dragon? How about a dead spell-casting dragon! My repainted dracolich figure got used prominently – the portal lead us to chambers with dragon corpses and then we were attacked by an INVISIBLE dracolich. (That’s why you can’t see it in the photo.) My Dwarf (and only my character) can see invisible things, and I had a spell up my sleeve that cancels out invisibility, so we killed it fairly quickly. Unfortunately, the dracolich spirit promptly reanimated one of the corpses and attacked again. We killed it again… see a pattern emerging? We started destroying (or badly damaging) the dragon corpses, but I think more healing would have been better. With a few rounds to prepare, the dracolich came back a third time and once again invisible. It seems to be a bit less powerful each time, but this bout it went straight for me… aaaaannd I’m dead. That’s my dwarf lying on his back on the upper right. Fulcrum, our powerful fighter charged across and managed to get a hit on it before it took to the air. (Still invisible!) That’s where we stopped for the night. We play again tomorrow! 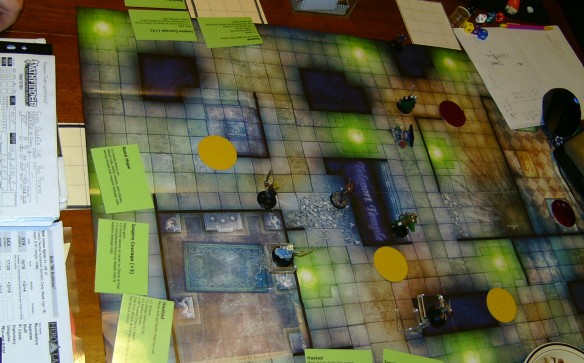 For the curious: The play mat being used is simply for its size not features – we are ignoring the printed walls. The red discs on the table represent dragon corpses (unmangled) and the yellow discs are the destroyed corpses. I’ve made yellow “condition” cards (not pictured – such as stunned, dazed, fatigued) and green “spell effect” cards (like Bless, Prayer, Haste, and Bard performance) that we use during the game to remind us of bonuses and penalties. Flying stands are Litko, from Paizo.

Over the last week or two I’ve been touching up figures that I painted last year. Many of them had paint that had rubbed off and some of them got some ink for shading. They all got a spray of clear matte acrylic for protection too. Now I’m working on a group of figures that I first painted probably twenty years ago. Most of them need more than just a touch-up! Four figures in this group (and three in the earlier one) are Lord of the Rings figures, Citadel 1985. I’ve decided that my next major painting project will be to work on the rest of these figures (I bought a lot) and do a blog post on them as a group. It’s a big group too – including horses and ponies.

I really haven’t gotten much further with my novel. I’ve spent more time reading, painting and watching TV. I did finally get an understandable message from the publishing agent on my answering machine! This gave me a chance to do a little research before I phoned her back and told her that I never wanted to hear from her again!

It turned out that she was part of an American Publishing company that looks like it makes its money off “new” or prospective writers. You pay them money and they help you produce a book, with lots of options (that you pay for) along the way to aid you to spell-check, edit, format, restructure, or whatever. I found a bunch of bad reviews and no guarantee that you would actually get a published book into shops, or make any money out of the process.

I’ve got a list of Australian agents, and submission guidelines, so I’ll stick with that.

You might not understand how remarkable I find a hot shower to be – especially as the weather shifts towards winter here!

My wife and I haven’t had gas on at home for four weeks – so no hot water, and only electricity for cooking. I had a most enjoyable phone conversion this evening, even better than expected. It’s great to call up a company to tell them you’re not going to pay their service charges any longer, but I was expecting to get someone who wasn’t really paying attention (or who cared) and to confuse them by not following the typical process of cancelling a service.  First off, I got an Australian guy (in Australia!) answer my call (as opposed to someone in an overseas call centre) and we had a great conversation. It mostly started getting fun when he asked me if I was moving house. This of course, is asked so that they can try and get the contract to charge for gas at your new address. I said “no”. Instead of continuing on with the next step, he asked me to excuse his curiosity, but wanted to know why I wanted the gas cut off if I wasn’t going anywhere. He understood, sympathised, laughed, apologised for waiting times and actually provided good customer service!

In short – my home is the second house on a large block, built some decades ago. My neighbours realised there was a gas leak and eventually worked out that it was the gas line to our house, that runs behind their house. After many phone calls, visits by plumbers/gas company, emails to gas company and council, etc we have determined that the old pipes from the gas meter to our house are very corroded, thus the leak. Being on our side of the gas meter makes it all our responsibility, and replacing (or bypassing) tens of metres of pipe to get to our house and around the garage, is both complicated and very expensive. I’m thankful for great neighbours – I dug a bunch of holes in their yard trying to track pipe and other people have been in and out. Tomorrow we shop for an electric oven & stove top. Then it’ll be a new electric hot water service. No more gas here… and solar panels sound like a great future investment!

Not much painting happening here at the moment.

I have primed four shields ready to be painted for half my Dark Elf / Drow band. I don’t see them being ready for play this Saturday, but I expect to need Drow figures over the next couple of D&D sessions.

This brings us to why I’m not painting. I decided that since last weekend was a long weekend in Melbourne, that I would get focussed on my novel. I was thinking that six months would be long enough to finish it. If the last week is typical of how much typing I can do (when I’m working on one main project) then I was perhaps very optimistic!

1. I got a message on my answering machine from the publishing agent a week ago. Unfortunately, 90% wasn’t understandable… so I still don’t have a company name or contact number. Hopefully, she will call back at a time when I’m home. Then I can compare the company to the list I have from the Australian Literary Agents Association. With more time to consider things, I’m rather sceptical that a legitimate agent would be chasing an unpublished author who hasn’t actually completed their novel yet.

2. Even when I’m not in my writing phase I still have ideas for the novel or character detail, etc and I’m much happier to type (and expand) detail than just jot notes on paper or store everything in my head.

3. The main story/plan/idea for this novel was put onto paper about thirty years ago. The bulk of what I have now was written (or re-written) in the last five years. I would like to finish this and then keep writing. I have details on agents, etc, and to achieve publication would be fantastic!

One character in my story changes identity regularly, and while I have a name for him, that name may never appear in the book. The problem with this, is that if no-one knows who you are, how do you get hired or employed if you don’t have a reputation. I already have an organisation to which he belongs, so with a little research I came up with a “working” name (or title) for my character and slightly changed the organisation name. So now I have “A’dun of the Kal’sa” – Dark Blade of the Four Swords. That prompted ideas for a section that I was going to mostly leave out, but now I can rewrite and keep it.

Dinner, then onto the Council Meeting….