I finished painting this guy yesterday, making this about four months since I started preparing all my skaven for painting. (Maybe two months since I did any figure painting… not encouraging.) He’s been sitting on my desk for way too long, but he’s not the last. There’s still two more to go!

This figure is a metal Games Workshop (Citadel) figure from 1993, 74464 “Grey Seer Thanquol”. I could have been a little fussier with some of the detail, but I reached the point where I’m happy and just wanted to say “done”. 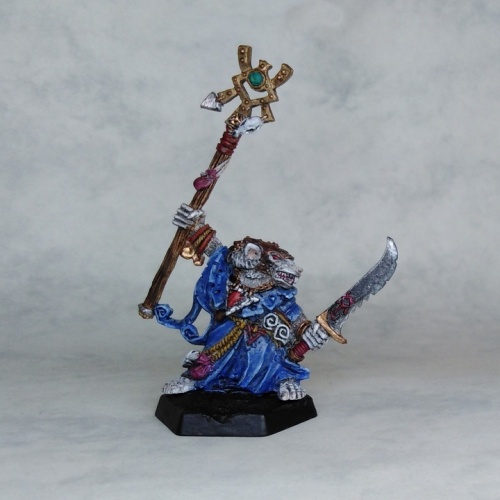 My main problem with these last three skaven has been colors. I’ve learned that I do really well when I’m copying a card/comic/movie or whatever – an established color scheme – but struggle with individual figures where I have to choose everything myself. It doesn’t always happen, but it’s certainly why I haven’t gotten anywhere with these last few skaven. 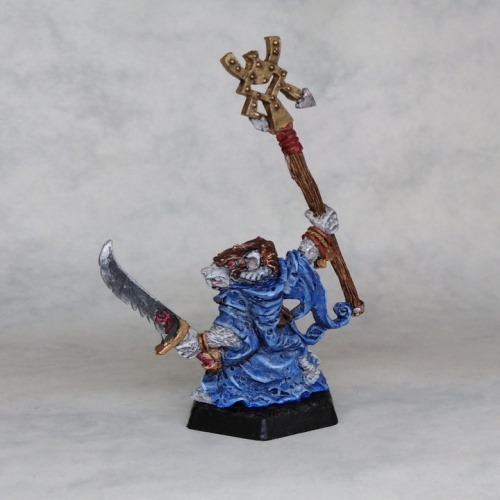 It’s too cold for spray varnish this weekend. He can go back on the tray until probably Tuesday, when we are meant to reach 17 degrees and sunny! The next figure I’m hoping to start today is a plague monk, and I’ve decided on red/browns for his robe. The last, a skaven warlock (engineer) might get some type of purple.