Here’s the last two of four Iron Wind Metals BattleTech mechs. I finished them just over a week ago, but I’d been waiting for some warmer weather to be able to spray varnish and let them dry. 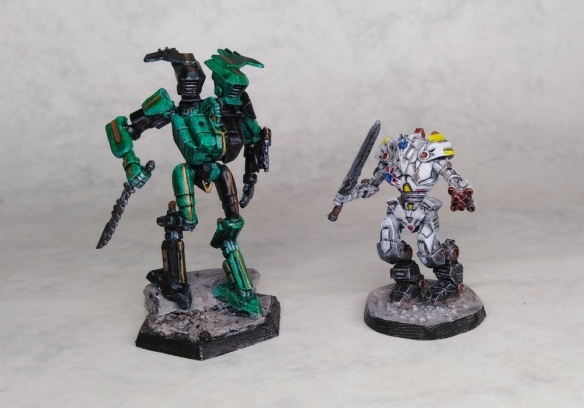 The Dola (on the left) is quite large and was rather fiddly to assemble. A complete rethink of the basing helped made it stand up properly and I feel looks really good. The sword it holds has a fine joint between hand and blade, and bends too easily. It would be easy to break off if care isn’t taken with handling. The Gurhka was a bit easier, but I would have spent more care positioning the legs at the time of gluing if I’d realised that early that it could end up bot being entirely vertical in stance. By the time I was basing it, and realised, I wasn’t going to pull it apart and try again.

The DOL-1A1 is an Inner Sphere mech used as a skirmisher, primarily by House Liao’s Capellan Confederation. As such I’ve gone with a colour scheme used by the Capellan dragoons. It mounts a pair of medium lasers in addition to the sword.

The Gurkha, also an Inner Sphere mech, was developed by the Word of Blake. The GUR-2G is fast with good armour. It has a four-laser hand, sword and particle projector cannon. (I presume the PPC is the chest mount.) 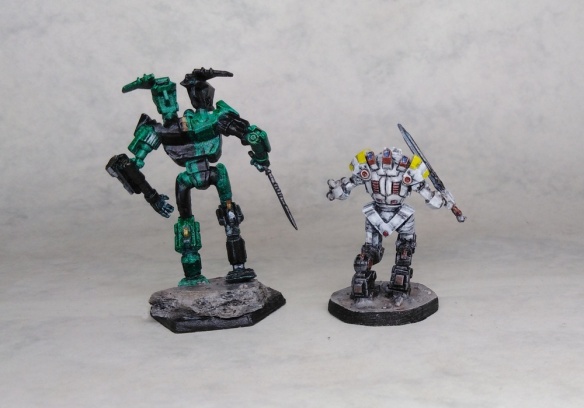 I’m very glad to have these all done and even happier with the way they all look now. Here’s a shot with all four together:

That almost completely clears my painting tray. Of the six figures remaing, I only want to paint two of them – a Warhammer terminator and a possible Drizzt figure. (Warrior with two scimitars) Two more are old skeletons that need paint removed before I could start on them, and that’s part of the reason I’m not enthusiastic about them. Then I have a metal two-part black orc shaman, and a bones priest. I have a non-bones prepainted plastic of the priest already, and the shaman doesn’t really fit with my other orcs.

Two of the four BattleTech mech’s are completed. I’ve been doing a little bit each evening during the week and thoroughly enjoyed painting these.

On the left is the Roadrunner RD-1R (also called an Emerald Harrier) and the right the Lament LMT-2R. 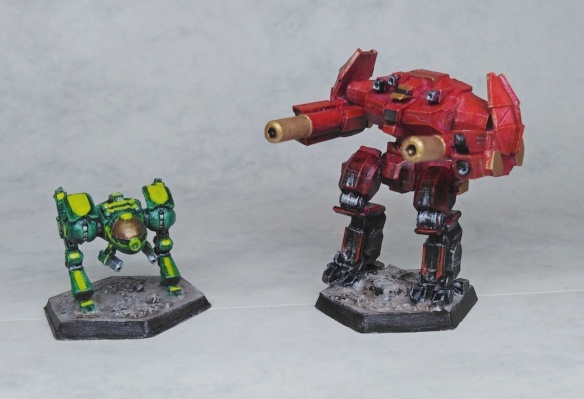 The Lament is a heavy Inner Sphere mech, 65 ton created for the armed forces of the Republic of the Sphere about 3127. (Dark Age 3131-3150) Mostly used by regiments of. This heavily armoured mech has a heavy particle projection cannon on each arm, and three medium lasers on the upper torso. 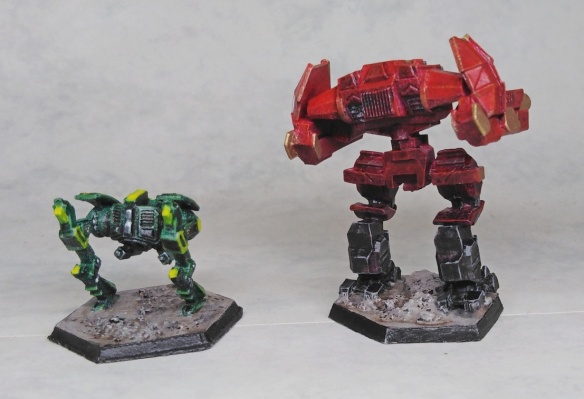 I couldn’t find specific colours for the Jade Falcon Clan (and didn’t look too hard) but did find many other JF mech’s painted in dark green with yellow panels… worked for me!

The Lament is painted in Stone’s Brigade spec’s, specifically following that of the 52nd Shadow Division. I’m not a Battletech nut, so I’ve ignored the “fact” that this divisiion was mostly active about 50 years earlier. I like the colours! The figure had a distinct hole/dimple in the lower right leg. I tried filling this, but wasn’t entirely successful and decided to do it up as battle damage.

EDIT: Got my colour scheme and mechs confused. Shadow Division is actually ‘Word of Blake’ which should be the Gurkha. Stone’s Brigade has a bunch of designs (not red) that were possibly beyond my skill, but I still like the red and black I used.

Here’s an outside image taken which brings up the colours differently for some comparison. 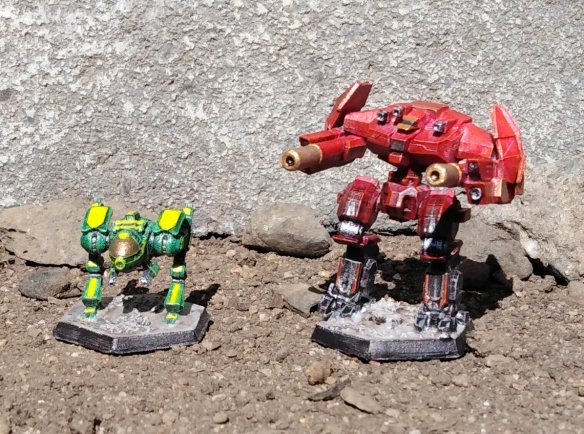 If I had decals or much better freehand, it would be nice to add insignia on some of the panels, but I don’t… so this is it. Two done, two to go!

Painting of this pair was fairly basic. I picked colours close to those in the painting guide and steadily worked on them over the weekend.

The guide shows the lighter furred bear as being almost white – I’ve started with a very light brown, and then lighter again on the face. Both caps wear pictured as a dark grey, but I wanted more colour, so the caps became a similar colour as their pants. 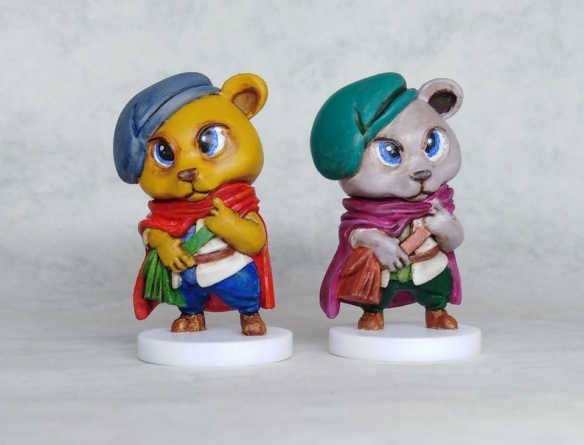 I actually played ‘My Little Scythe’ on Saturday afternoon, for the first time. It’s a fun game, simple, but not basic or boring. You choose an action each turn – to move, look for diamonds/apples, or make something from the diamonds/apples already collected. To win the game you need to get four trophies, from eight possible categories. [Collect apples, collect diamonds, gain friendship points, win a pie fight, etc.] I only got two. My mate and my wife each achieved four trophies in the same turn, and she narrowly won by having more resources.

It was great seeing nearly all the figures in full colour, rather than the white and beige plastic they started with. We didn’t get to use the bears – or I’d have taken a group photo. (Maybe next week.)  The weather hasn’t been as good as other weekends, so while they were nearly done, I wasn’t rushing to finish them on Sat. I didn’t expect to get good weather to sit them outside, varnish and let them dry. I was asked to paint a white eye spot – which is meant to be a “light reflection”, not a pupil, based on the guide. This is the first figures that I’ve actually done that for. I could update the others if required at a later time.

I think I’ll touch up that yellow ear before they get varnished.

This pair I expected to be fairly easy to do, since at first glance, most of the figure is armour.

A closer look suggested they weren’t going to be quite so straight-forward. What they wear makes no sense (or is impossible) but it is a kids game, so whatever! Each wears a visor, but no helmet – it looks like it bolts straight into their head. They have elbow guards with no straps. The shoulder guards could join to the armour at the neck. The head plume would make sense if it was actually hair (or on a helmet), but it’s meant to be coloured and has a metal (?) ring that sticks on top of their heads. 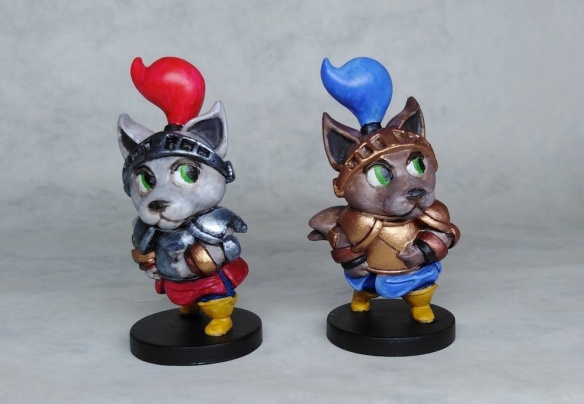 The armour bits were pretty easy to paint, with a couple of careful bits of fur in between parts of it. Their pants were the hardest bit, with narrow gaps and awkward angles for a paint brush between shirt and boots, especially underneath. The painting guide had the armour in a dull grey, and a slightly orange-tinged yellow. I thought actual metallics would be much better and I think the silver and bronze came out well. 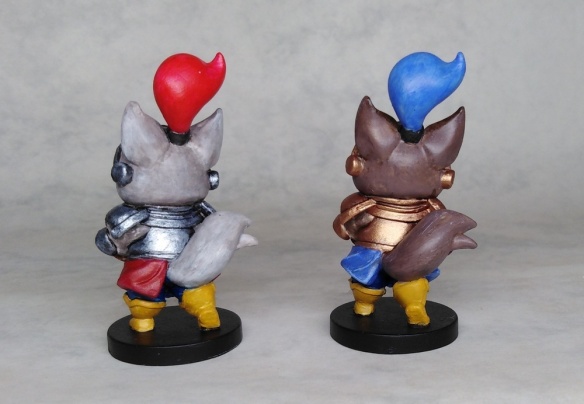 Only two bears to go… although they look rather more like mice to me.

“Tiger Seekers are not only master bakers, but excellent marksmen in the kingdom’s official sport of pie throwing.”

Two more figures painted for the board game “My Little Scythe”, and the last four (bears and wolves) are ready to start. 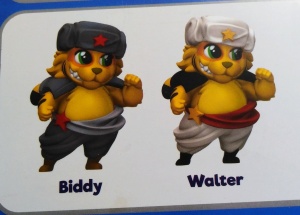 The paint guide showed greys and white for their clothes, which I started with, but quickly gave up as boring and decided on a much more colourful palette. I think this has worked out much better. (Aside: Also, my wife doesn’t like me painting these figures with white, she thinks it looks like I didn’t paint that part.)

The paint guide shows a few horizontal lines on the side of their faces and arms. Looking at the figures, particularly the “mane of hair”, I would suggest they should be lions. I looked at some tiger photos, and went with lots of thinner markings on arms and their back. I considered painted their faces too, but it would be a bit too much detail. I did paint whiskers, sat back and then cleaned them off again. Their noses were originally pink, like a real tiger, but it didn’t stand out against the yellow and ornage, so a bit of ink to darken that. The white around the mouth is also based on real tigers. 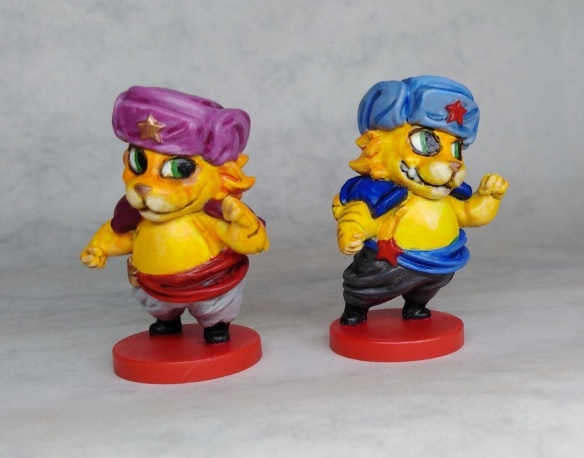 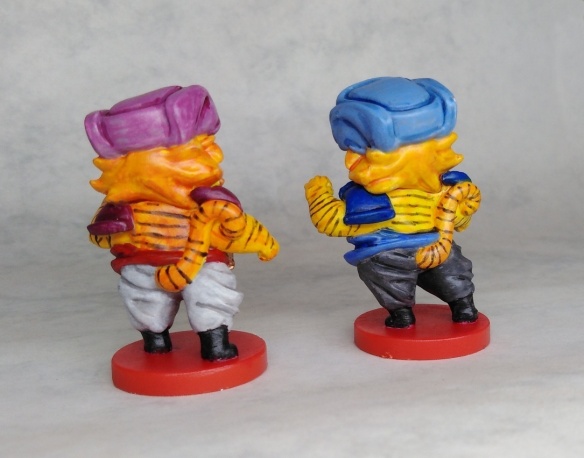 The only thing I’ve decided (after spray varnish of course) is that the stripes should have been a bit darker. Reflection in the images makes the lines seem a bit lighter than they actually are, but I’m not completely satisfied, particularly with the guy on the right.

Another four figures painted for the board game “My Little Scythe”. My mate and I managed to workout a way to exchange figures during stage 4 restrictions. (It helps when someone is a nurse working at a hospital very close by.) A pair of monkeys and muskoxen. The monkeys were fairly simple to paint. The muskoxen are carrying a lot, so there was a bit more to do with them.

The only tricky part with any of these figures has been getting to the lower bits of the figures – like behind robes/cloaks, and the bottom side of jackets or pants. The figures are standing low on the base, and there’s not much room to get a brush in underneath. The only complaint raised with my painting (from by the young lady receiving these) has been that the “girls” should have eyelashes. Otherwise they are “so pretty!” I did consider eyelashes, but even on figures this size, that a stretch for my skill and brushes.

Eight painted and six to go: wolves, tigers and bears… oh my!

I’ve just finished four figures for a board game that I don’t own, and have never played! “My Little Scythe” is essentially a children’s version of the 2016 adult board game “Scythe” – both of which have nice figures to use. A mate recently stocked up on some board games to play with his daughter and this was one of them. Soon after getting the games, he told me about them, and figures, etc. His email ends with “PS Scythe has some nice miniatures, and a painting guide for them. If only I knew someone who could paint…”

There are seven pairs of figures – each representing a humanoid animal in the game. He was able to drop two pairs in to me to paint just before our stage 4 Covid-19 lock-down began.

Each figure is about 45mm high, which makes them a nice size to paint. The game also comes with a “Painting Guide” which has coloured images of each figure. I found quite a number of people have painted these and posted pictures on-line, so there were a number of variations to compare. I’ve used the guide as exactly that, not a template. I found (after starting painting and looking at online examples) that using lighter and brighter colours than the guide suggests give a better looking effect. It’s a family board game – why use dark colours, or worry about texture and shadows?

They have been fun to paint and look great. I just don’t know when I’ll have a chance to swap them over and paint some more!