For years I’ve produced a campaign summary sheet that lists all the characters, and important information such as AC, saves, alignment, height and weight, speed, initiative and some skills. It both saves me from asking players the same questions over and over again, and means I can make a roll, or ask a player to make a roll, without them knowing what save or skill they are rolling for.

Each time combat starts, I ask all the players for their initiative and list them in order with the monsters initiative values. I list all the monsters HP’s and the combat progresses. Unfortunately, with six players and multiple creatures +/or NPC’s, occasionally someone misses their action. It also becomes easy to forget how many rounds the combat has been going for which may be important for certain spell’s or effects.

The tactical console (TC) assists with all of this. I still refer to my character summary occasionally, but I have access to more info through the laptop. I certainly don’t need the scraps of paper tracking initiative and HP’s. The standard screen has all the detail you could want on a character out of combat. (With a hovering cursor, or click you have access to everything on each character.) Once combat begins, the console sorts everyone participant by initiative and you press a button when they take their action – dropping them to the bottom of the list. You can also apply damage/healing and a activate/deactivate anything that appeared on the “In Play” and “Condition” tabs for each character/creature. It even can cope with people who ready an action, or delay – keeping the Hero “paused” at the top of the screen, but separate from the rest of the group. 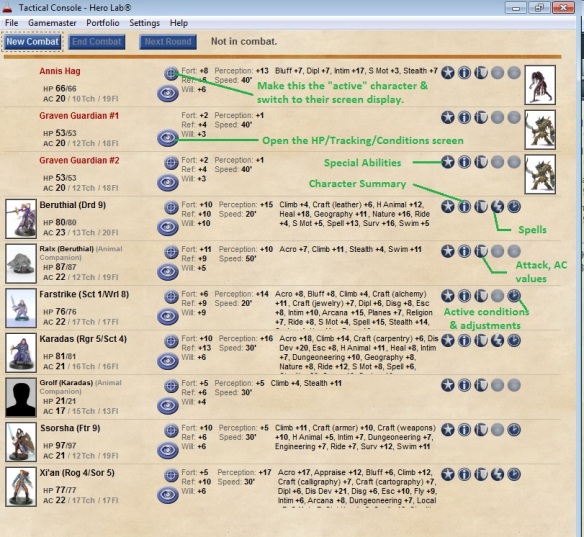 Tactical Console with Allies and Enemies

TC1: For this example of how the Tactical Console works, I loaded three opponents into the Portfolio through the Encounter Builder – one Annis (Hag) and two constructs (Graven Guardians). The first screen shows the layout of the TC window – which appears over the standard portfolio display and covers about half the screen. The buttons that appear here have the same functions as those in the standard HL display. Allies appear named in black text with an image on the left. Enemies are named in red text, with an image on the right. As you can see, each creatures name, class, HP, AC, Saves, Speed and a summary of Skills are show. More detailed information is available by pop-up from the side buttons. I have taken photo’s of the miniatures used by players and put those into Hero Lab. “Grolf”, an Animal Companion of the Ranger/Scout has not been assigned an image in HL, so appears with the default “empty” image. At any time here, you can switch screens just by clicking on the screen you want, or the “make active Hero” button.

TC2: having pressed the button “New Combat” the TC rolls initiative for each creature and places them in initiative order. (There’s a dice roller built into HL too!) I tend to let the enemies INIT rolls stand, and replace the assigned INIT for the Players with their actual rolls, then re-sort the list. (A “resort” button appears if you change any of the INIT results.) The little arrow buttons on the far right side of the screen allow moving a creature up or down one place in the Init order, or to the top or bottom of the list. The “End Combat” button discards initiative and takes you back to the non-combat screen. “Next Round” jumps to the next round of combat without going through each creatures actions. The “active” combatant in boxed at the top of the screen. Note that skills have been replaced with equipped weapon details. Flat-footed Ac is bold for those that haven’t yet acted. The hourglass symbol reminds you of those that haven’t yet acted this round – it’s replaced by a tick as they do. As combatants act (marked by pressing the “play” button), they move to the bottom of the list. 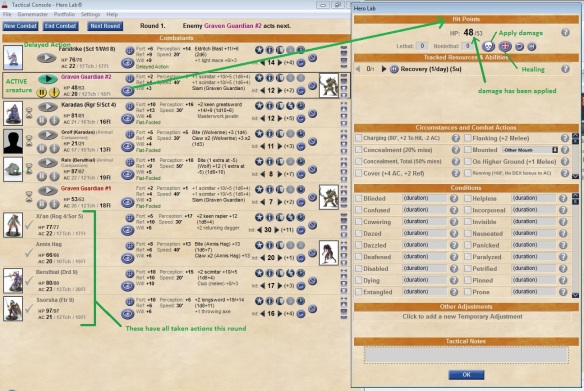 TC3: Halfway through Round 1. Farstrike has been placed at the top of the list because for his action I chose “delay”. A reminder in green text appears, and he can act any time by clicking on his “play” button. The Graven Guardian #2 currently is taking it’s action and next to the TC screen I’ve opened the tracking screen. This shows where HP damage or healing is assigned, any abilities/resources available to the creature, and the other options normally on the In-Play and Conditions tabs. A box for “Tactical Notes” appears at the bottom – anything entered here is shown in Green text under saving throws on the TC.

End of the first combat round

TC4: “Grolf” has been removed from the combat (assuming that having taken damage, he has withdrawn). He could be put back into combat by clicking on the sword button to the right. To continue combat into a second round, it is necessary to click on the “next round” button. If I “end combat” or close the TC, any damage done to creatures and any conditions activated, will remain – and be shown on the relevant part of the HL screen.

Once combat has been completely resolved, it’s necessary to “delete” the enemies from the portfolio regardless of whether or not you keep the TC open. Then you are ready to load another group of creatures for another encounter.

All the images above are from HL Pathfinder. The 3.5 D&D version is identical, except that the background is blue in colour!

The editor has a very good manual and set of tutorials. It’s quite easy to follow the steps given to add simple feats, spells and items into Hero Lab – especially if you “copy” an existing item that has the same or similar powers/details and just change a few details. For example: Making a wondrous item (gauntlets) that grant a Strength bonus is really just a case of copying a “Belt of Strength”, renaming it, and changing the body location to hands. Looking at existing things (and how they have been created) really helps when it comes to editing your own stuff. The forums are quite good for advice and assistance – there are lots of people doing editing, and happy to help.

I’ve mostly been adding monsters to 3.5 D&D, because the “Community Content” available has pretty much given me all the Classes, Feats and Spells that my group uses.

I’m still working out how to implement a few feats/abilities, particularly because I’m transferring 3.5 content to Pathfinder.

Hero Lab is the best D&D tool I’ve ever seen and used. I’ve been using it now for nearly 3 years and almost every update adds a little bit to make it smoother or add a bit more functionality.

As a player – the standard part of the program makes character creation and maintenance much easier. Every time any of the characters level up (in both the groups I’m part of), I update the Heroes in HL and compare the two. It’s very easy to incorrectly add up bonuses, forget to allocate a skill point, or when improving Ability Scores miss updating a skill. I’d say that every time a group levels, I’ve found an error by checking with Hero Lab that we wouldn’t have noticed otherwise.

As a DM – I know that the players have everything on their character sheet correct. Using the tactical console (especially now that I’ve streamlined a laptop just for gaming use) makes combat smoother to run and much less likely that someone will miss taking their turn. Having monster detail available immediately, for EVERY creature in the encounter – without having to flip through multiple rule books – is fantastic. This also means that I can access a description for every feat, spell, class ability and magical item through my main screen too.

I’ve never seen Hero Lab itself make any errors! The only mistake I’ve ever seen was once, in the 3.5 D&D community data set – but that error was reported on the forums and fixed in the next update. User support (through the forums and data files) for the program is fantastic!

The only downside I see to Hero Lab is the output – the printed Character Sheets. I’d like some of the sections on the sheet to be positioned as the player wants them (like weapons and gear), not being broken up over the pages. I know there are some customised outputs available, but they aren’t what I’m looking for, and I think I’d be in the majority of users when I say I’m not familiar with XML and so unable to make my own custom output/sheet.