Looking back over 2016, I note that I painted from scratch about half as many figures as the year before (27 compared to 60). But it’s easy to see what I did spend a lot of time on – Zombicide: Black Plague! I spent more time playing Zombicide than any of my usual RPGs, or any other game. My game review of Z:BP was my most seen post, with 771 views (8 times as popular as the 2nd place comer) Of the figures I did paint – 12 were from Zombicide.

On New Year’s Eve, I ran my third playtest of Gamma World 4.5 (my d20 rule set is pretty much complete now) and played two games of Zombicide!

2016 was a pretty good year for the blog. Compared to 2015, I tripled my number of visitors (3041 views, 2045 visitors from 67 countries!) I had a lot of fun – revisiting old game systems that I hadn’t looked at for a decade or more (MERP, Gamma World), finishing a major part of the D&D campaign I run, and starting a Greyhawk/Pathfinder project for Hero Lab.

This year has started off with me enjoying my annual leave break (but I go back to work tomorrow) and I’ve spent a lot of it playing World of Warcraft, some more Zombicide, and a lot of sleeping in. I’ve been reading through the “Sword of Truth” series by Terry Goodking (in book four now) and had a couple of sessions of Pathfinder. 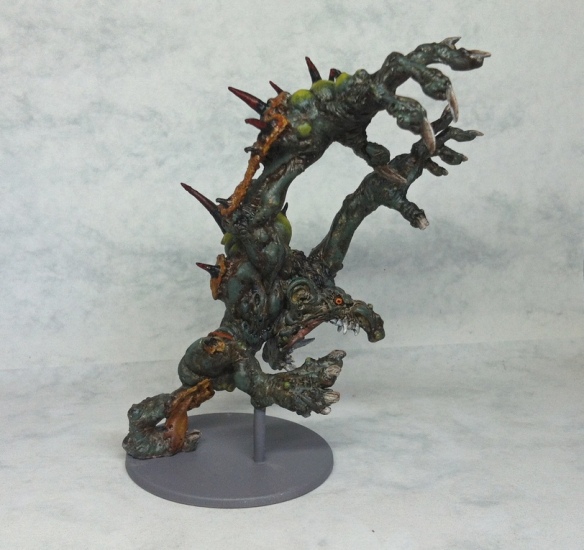 Yesterday I finished my first miniature painting of the year – the Abominatroll from Zombicide: Black Plague. 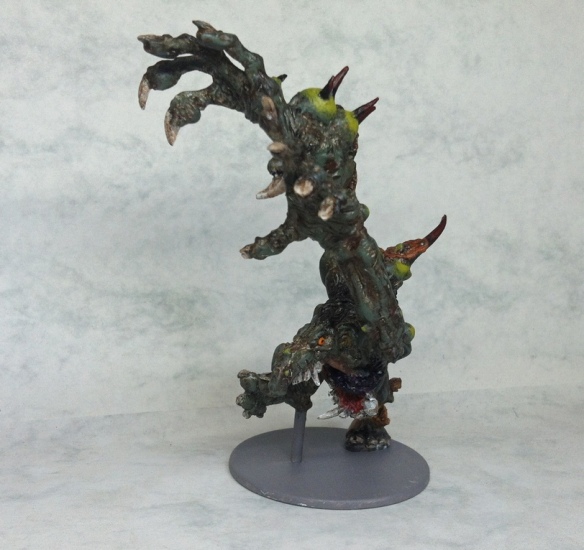 He was enjoyable to paint. Mostly a dark green base coat, some brown paint and dark tone ink for give some depth and shading, then a lighter “field grey” (more dull green than any grey) for highlighting. Touches of yellow, pink, red, white etc for various detail. Mostly flesh and white, then brown ink for finger & toe nails, with a distict “light olive” for the lumps. It’s a bit brighter in colour than the images make it look. 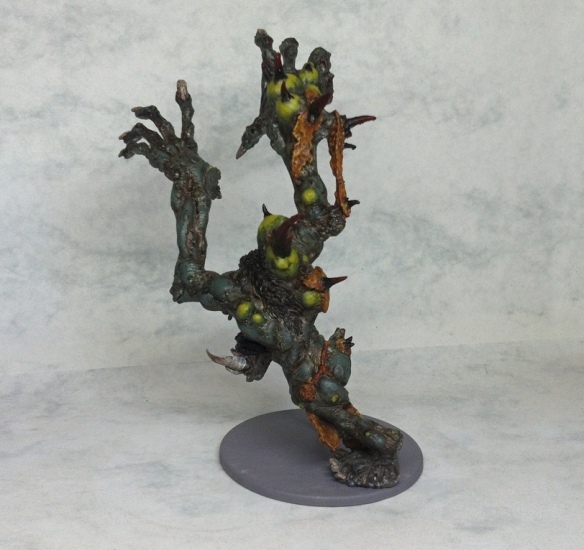 I still have the minotaur and wolf alpha to go – then I hope to get onto painting heroes/survivors!

It’s always fun when I get to use one of my favourite quotes. (Arthur Dent, from “The Hitch-hiker’s Guide to the Galaxy”)

It’s quite remarkable in a game when you have a player prepared to die in the hope that the other players might win. Co-operative games don’t always mean that players co-operate. In Zombicide, unlike most other zombie themed games, it isn’t every man-for-himself and generally every-one sticks close together and thinks about what they are doing and how it will effect other players. It’s also a game where charging out and killing everything because you have a shot-gun with extra ammo is NOT a good idea.

Last weekend a group of five of us got together and played two games of this. It was the first time I’ve played this game; the others have played a number of missions together previously.

Game One: By the end of what I think was only the first turn, we had one player declaring that we were all dead and there was no way to win. As it turned out, three people died in the next two turns and that left the last two of us running through (different) buildings trying to avoid zombies and get out the other end of the building. We managed to collect four of the seven objective tokens and I was the last to die. That’s my figure (purple) in the car… 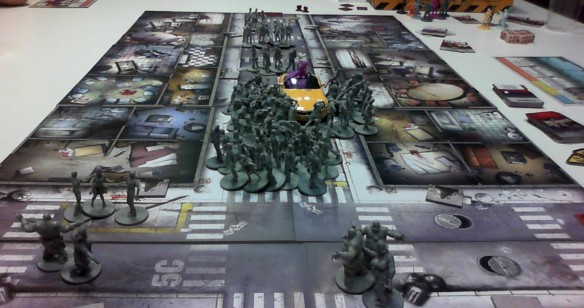 Game Two: This time I died first and early on. The other four players got a police car, spent time searching for weapons and driving up and down the street mowing down zombies until able to open doors safely and send people in to recover objective tokens. Then we got back down near one of the “spawn” points, grabbed the last two tokens and won the game! I still say “we” because even though my character died and I was mostly moving zombies, I was still part of the discussion on tactics and suggestions and part of the team – it was a TEAM win, not an INDIVIDUAL one.

Each player gets a Survivor card, a figure that matches the survivor picture, and one piece of equipment. Starting equipment is mostly frying pans, but there’s an axe, crowbar and a pistol too. Each turn consists of firstly the Players Phase: each player takes their allowed actions in clockwise order. Then Zombie Phase: attack or move every zombie on the board, and lastly taking a “zombie” card for each “spawn point” to see if zombies (and what type) appear. When you start the game, you choose one player to act first. You pass a “first player” token around (clockwise) at the end of each turn, so that a different player acts first in each new turn.

Each player starts with three actions and a skill. An action can be: move (one “zone”), open a door (if you have the skill or equipment to do so), reorganise your limited inventory, ranged combat, melee combat, get in/out of a car, make noise (purposefully!) or search. You can only search once (in a building or car), other actions can be done more than once. Searching means you take an equipment card – often cans of food, but also ammo, shotguns, pistols, rifles, axes, machetes, etc. Skills include: free combat or move actions, damage bonuses in combat, re-rolls, being able to avoid damage, or get bonuses with certain equipment. Some actions make noise – you place a token each time.

For each zombie that you kill, you gain 1 experience. 7 experience puts you at Yellow Danger level and gives you another skill. 19 is Orange level and you choose 1 of 2 more skills, 43 (the highest) is red level and you pick 1 of 3 skills. Skills available depend on the character card. Image shows a character from the game, with some equipment. 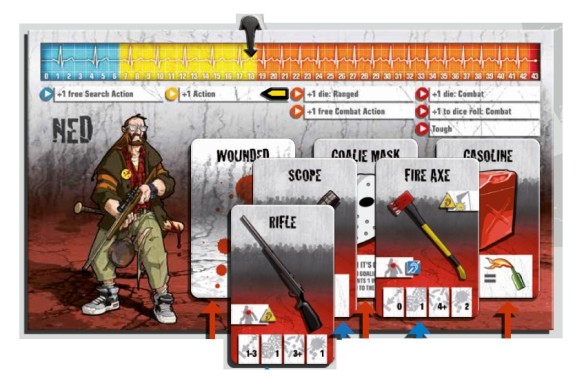 The danger level is very important. The number of zombies (and type) that spawn at the end of each turn increase according the highest danger level of each survivor still in the game. So you don’t want one player to race ahead of all the other players!

Each time you open a door to a previously “sealed” building, you take a zombie card for EACH room in the building and spawn zombies according to the current danger level. This means opening doors early in the game gets you less zombies and less powerful zombie types, than later in the game. Of course, if you have a large building, this can mean a lot of zombies when the characters are still “weak” or under-equipped, but you can only search for equipment IN a building.

The Zombies come in four types. Walkers, Runners, Fatties and (generally) a single Abomination. Walkers, Fatties & Abomination: They get 1 action: Attack or Move. Runners get 2 actions. Any zombie in the same zone as a character attacks and causes 1 damage. (You die if you take 2 damage. Look at the image with my character in the car again, there are about 20 zombies in my zone and about the same in the next zone.) It takes 1 damage to kill a Walker or Runner, 2 damage to kill a Fatty, and 3 for an Abomination.

Weapons: Each has a range (0 to 3 zones away), the number of dice (d6) you roll when you attack, and the number you need to score a hit. Most weapons cause 1 or 2 damage to a single target. With enough actions (or skill bonuses) you may be able to hit and kill multiple zombies. You can’t wound zombies – so you MUST have a 2 damage weapon to kill a Fatty. cars only do 1 damage, but you get an attack roll against every zombie in the zone you drive in!

The game mechanics are quite simple. There’s no dice rolling for the zombies – they simply move (firstly) towards any survivor they can see, or else towards the greatest source of noise, by the shortest available path. As a player, you have to work together and think about what others can or want to do. You have to watch where the zombies are – you really want to kill any in an adjacent zone – not give them a chance to move close. In later stages of the game, if you can’t place a required zombie, ALL zombies of that type get a immediate free action – so even a slow moving walker can suddenly be on top of you. You have to balance out killing zombies, with hiding or searching for better equipment. You need to protect each other and try to keep your survivors at similar danger levels. It’s a lot of fun, but/and it gets intense!

It’s a great game – play it if you have a chance. You don’t have to be a “zombie” fan, but if you are you’ll probably enjoy it a bit more.

This is a collaborative game by Guillotine Games, for 1-6 players of age 13+. Each game will be very different and can last from 30 minutes to a number of hours, depending on the type of mission chosen and the number of players. The website has great images of all the game components – boards, cards, characters & figures – and you can download the rules, missions and F.A.Q. – all free.

You need a basic pack to play (Season 1 or 2), which costs around $90. There are a lot of expansion packs that include more game tiles, zombie figures, more types of zombies, more survivors, etc.

The car in the image shown didn’t come with the original game – this was just a model car that’s the right size. Everything else pictured is actual game product. We had more than one expansion pack, so we can have a lot more zombies than the basic game, and a greater choice of survivors.

The basic survivor cards are all the typical characters you see in zombie movies. The “promo” survivor cards are based on people/characters from TV and movies, such as: Simon Pegg in “Shaun of the Dead”, Shaun Connery from “Entrapment” (or James Bond), Beyonce in “Austin Powers”, John Cleese, Chuck Norris, Jack Nicholson, Jason Statham, Kurt Russel, etc.