Talisman – My love/hate relationship with a board game!

Games Workshop released a fantasy board game called Talisman in 1983, for 2-6 players. I have an early second edition of the game from 1985. While I generally prefer games that rely more on skill than chance, this was one game that I’ve always really enjoyed, but often cursed the roll of the dice or a card draw. (The hate part of things relates to how long the game can go on for.) 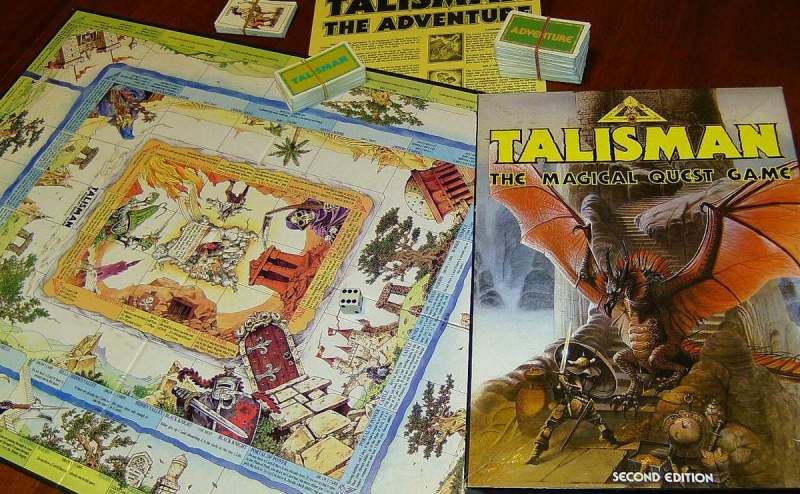 Last weekend I received a copy of the digital version of the game. (Released on Steam in February) I haven’t done any painting this week, but I have spent three nights losing against AI opponents. This version (by Nomad Games) appears to have the same “board” as the 2nd edition, but I believe it’s based on Fantasy Flight Games (Talisman licence since 2008) “Revised 4th edition“, since the character and card images are the same. (Also, the expansions match.)

For those that haven’t played the game (or don’t remember much) here’s a summary:

The board layout is three circular regions – Outer, Middle and Inner. Each player selects a character (randomly) that has different starting stats and special abilities. Strength is used for physical combat, Craft for psychic combat. Players have a number of lives, and a bag of gold. In your turn, you roll a dice (d6) and move that many spaces (locations) around the board. Each location represents a place (such as) – plain, forest, wood, shrine, chapel, graveyard, tavern, village, city. Most locations require the drawing of an Adventure card, others have a dice roll to see what happens. The cards may be an enemy or monster to fight, an object that can be kept, a follower who may assist you, etc. Some may allow you to gain Strength, Craft, Life, or Spells. Combat is 1d6 + Strength (or Craft) + item/follower bonuses vs the same roll for the creature. A win means a trophy, else lose a life. Players build up their characters (increasing stats, buying/finding items, etc) and move towards the centre of the board, hopefully gaining a talisman along the way. In the inner region lies the Crown of Command, which is used to drain the life of all other players in order to win the game.

My game box states playing time as “1 Hour plus” and I don’t think I’ve ever seen a game take less than two hours. (Playing the digital version with AI opponents is quicker than with real people, but still takes a while!) This is mostly because of the great amount of time required to build up a character to a level that can enter the Inner region and progress (without dying or being pushed back to middle/outer region). This, and the chance of losing nearly everything with a bad dice roll (or unlucky card draw) is the games biggest down-side. The game play is very much one based on chance. The only skill is in good use of items, spells, and special abilities. There is a lot of variety with characters and cards – it’s also a large board – so every game is very different.

The two main “changes” that I’ve noted in the digital edition (compared to 2nd) are the Fate stat (which allows re-rolls, FANTASTIC addition!), and the ability to increase Craft by trading in defeated spirits (psychic combat monsters). In 2nd edition, you could only trade “strength using” monsters. (7 Str points of creatures for +1 character Strength)

It’s extremely faithful to the board game. The graphics are very well done, and everything runs smoothly. You can play with 2 to 4 players, with those players being AI run, or actual people. The game speed can be adjusted, various “house rules” can be turned on/off, and it saves games. It’s really nice having the game track all your bonuses, and you can click on any board space to get detail on that location, as well as check what cards (objects and followers) any other player holds. It’s got a tutorial mode and good “help”. Overall, I’m very impressed and I can see myself playing a lot of this over the next month.

Ideas for improvement (any version):

I’d prefer to have a 5 point to +1 Strength/Craft trade-in on trophies (defeated creatures) to speed up character development. I’d also love to see the Inner region locations to be less based on random dice rolls and more on character stats/abilities in some way.

I like the “Mines/Crypt” squares – roll 3d6 and subtract your Craft/Strength. If the result is 0 or less you can move on next turn, otherwise you’re back in the Middle region. (Some followers can give a modifier to the roll.) The “Vampires tower” is a random roll: lose 1-3 lives, but you can sacrifice followers to offset the loss. These are good locations, whereas the “pits” and the “werewolf den” are almost pointless combat rolls. (Any character that has reached this point should have such a Strength that they win easily, except perhaps by rolling a 1 for themselves and a 6 for the monster.) “Dice with Death” is just ridiculous – roughly a 50% chance to move on next turn, otherwise lose a life and wait to try again next turn.

Now I’d like to see a digital conversion of the DungeonQuest boardgame – that’s a nasty, fun (and time-limited) game that often had no winner. (I’ve still got a list of high scores of those who got out with treasure, going back to 1989!)

Fantasy Flights website has a pdf version of the rules to the revised 4th edition. I noted that in that, under “Alternative Rules for Faster Play” they suggest the following: “If players find themselves a little short on time, they can increase the rate at which Strength and Craft is earned. This speeds up the game by making characters more powerful more quickly. The normal rule is that to gain a point of Strength or Craft, a character has to exchange trophies with a combined value of seven or more to gain the point (see “Trophies” on page 14). To speed up play, players can simply change this value to six, or to speed things up even further they can change it to five.” I’m planning to print this copy of the rules to use with my 2nd edition game.

One thought on “Talisman – My love/hate relationship with a board game!”