Nolzur’s Marvelous Miniatures – Wizards of the Coasts newish range of unpainted D&D figures. These look fantastic in all the sale images available. In most cases you get two 28mm figures at a low price, they appear to have a high level of detail, already primed and ready to paint. Each figure is made from a clear resin, they feel a bit firmer than reaper bones and the primer makes them easier to paint than bones figures are.

I often watch out for figures at a reasonable price to fill gaps in my collection. Two figures in particular: a medusa and a mind flayer have been previously released by Wizards and/or Paizo, but are almost impossible to get hold of. I noticed one of the online stores I buy from had what I wanted when I found the owl figures I recently painted. Getting packs with two different figures for both a medusa and the mind flayers was a great opportunity.

The actual product was slightly disappointing. I received five packs – a total of eight figures. I’m convinced that the promo images used to advertise/sell these images have either been – of production models used to create molds, greatly photo-shopped, and/or cleaned up of mold lines, etc, by an extremely talented person. Every figure had a lot of mold lines and/or flash to be trimmed or filed. This gets quite annoying when there’s a line running along two sides of every spider leg, along the long fingers of a mind flayer and on the snakes of the medusa’s hair. One of my mind flayers lost a finger while I tried to carefully cut out the “webbing” between his fingers. I haven’t been able to completely eradicate all the lines on some figures, but painting should hide a lot of that. 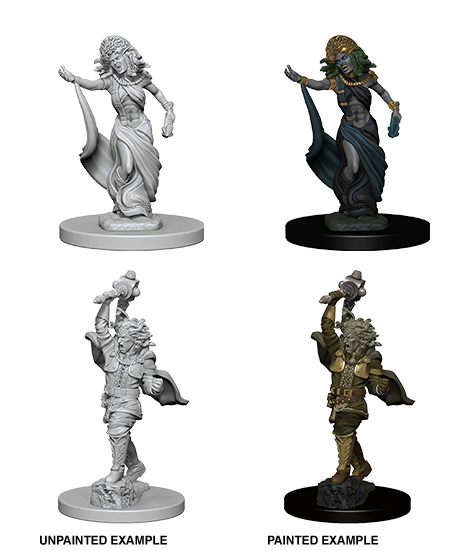 In the shot above, the male medusa has been cleaned up about as good as I can get him and had his face painted.

There’s no way I’m going to get the medusa snakes to resemble the painted images available, but thankfully after cleaning I’m happy with pretty much everything else about the figures. I’ve re-based most of them, since I don’t like the 1mm thick round plastic bases they come with. The level of detail is very high, if not as good as pictured, and one of my dwarf warriors might have been better if there wasn’t such a thick layer of primer on her face.

Ultimately – I’m looking forward to getting all these figures painted, and I will buy them again. I may think twice if the figure has any limbs or appendages that are long and thin.